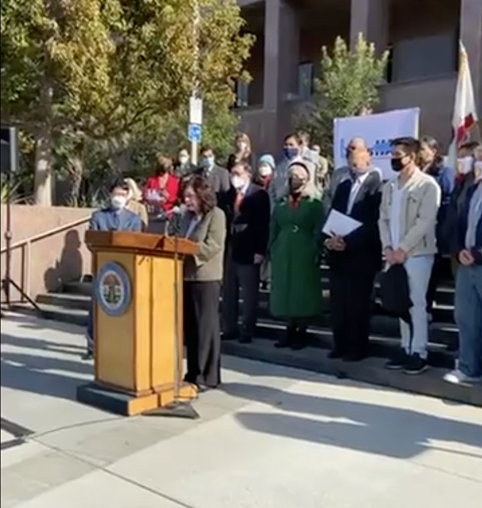 The Los Angeles LGBT Center joined a multi-racial coalition of civil and human rights leaders yesterday to speak out against the dramatic rise in hate crimes against the Asian/Pacific Islander (API) community over the past year.

“The Center is here today to stand up against hate—to stand up against the attacks against our API siblings, including API members of the LGBTQ community,” the Center’s Director of Policy and Community Building Terra Russell-Slavin said during a morning press conference on the steps of the Los Angeles County Hall of Administration which included Asian Americans Advancing Justice LA President Emeritus Stewart Kwoh; Urban League of Los Angeles President and CEO Michael Lawson; Anti-Defamation League—LA Regional Director Jeffrey Abrams, and Director of the Coalition for Humane Rights of LA Angelica Salas.

“Since the Center’s founding more than 50 years ago, we have been fighting back against this type of vitriol and violence,” she added. “The consequences of hate violence are deadly, and it is time that we put a stop to these behaviors.”

The press conference occurred a day after a man was accused of shooting to death eight people—six of whom were women of Asian descent—at a string of Atlanta-area massage parlors. Law enforcement authorities said the murders don’t appear to be motivated by hate but also cautioned that the investigation was still in the early stages.

“I mourn the lives that were taken last night in Georgia because no matter where it happens, it’s an assault on all of us,” said Los Angeles County Board of Supervisors Chair Hilda L. Solis who led the press conference. “Our API communities deserve to be celebrated, embraced, and not attacked. This hate must stop. The vandalism, the verbal assaults—and now—the murders.”

Solis said there are 1.5 million people of API descent in the county, and many of them are not feeling very safe these days.

“Right now, just a mile away from here, we have elderly people in Chinatown who are afraid to go out and walk. It’s unacceptable,” she said.

Cal State University, San Bernardino’s Center for the Study of Hate and Extremism recently conducted a survey of police departments in 16 major cities and found a total of 122 anti-Asian hate crimes in 2020—a 149% increase from 49 cases in 2019.

“Given what we know about the way hatred spreads and infiltrates and ultimately attacks communities, it’s sadly unfortunate, but not surprising, that we find ourselves in this situation,” Russell-Slavin pointed out. “We’ve just had four years of constant attacks from the Trump administration and our nation’s former chief executive repeatedly using anti-Asian rhetoric to refer to COVID-19. He used racist, xenophobic, and anti-Asian vitriol and failed to denounce white supremacy. The results were, in fact, intentional.”

Leaders urged communities to unite against hate and division and to embrace compassion and action.

“We must reclaim the ground lost, and we must make clear that, in Los Angeles, we will not tolerate attacks against any in our community,” Russell-Slavin said. “To those in our communities who may be too fearful, or simply don’t know that resources exist, I want to make clear that we are here to help.”

The Center provides resources for LGBTQ survivors of hate violence through its Anti-Violence Project. Victims are also encouraged to call the County’s 211 hotline for more resources.

If you, or someone you know, have been a victim of hate violence, contact the Center’s Anti-Violence Project by calling 323-993-7649 or emailing avp@lalgbtcenter.org