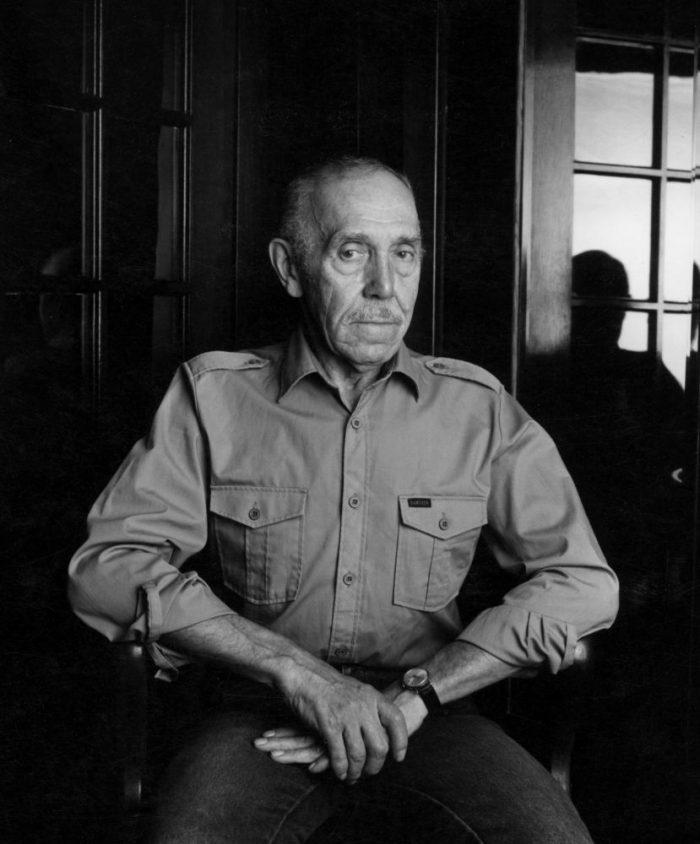 Tom of Finland (Touko Laaksonen, Finnish; b. 8th May 1920, d. 7th November 1991) has long been recognized as one of the 20th century’s great visual innovators.

As he confronted the stigmas and stereotypes that long burdened homosexual desire, his depictions of empowered gay men fully enjoying their sexuality proved liberating on social and aesthetic levels alike. The sheer range of his influence on the culture at large is immeasurable. His work assumes a key role in the art historical discourse (Tom’s drawings are in the collections of institutions like The Museum of Modern Art, New York and regularly appear in museum shows throughout the world), but also occupies a place in every corner of the popular imagination.

On May 8, 2020 Tom would have turned 100 years old and many celebrations have been planned internationally.

For a preview of the year to come, Let’s Go Camping With Tom of Finland ran in Kendal, UK from 28th September–19th October 2019 and charted the artist’s career including his famous comic series. In February, Brooke Wise curated a Tom of Finland Foundation fundraiser exhibition, I Won’t Bite as part of Frieze Los Angeles and included a range of artists who support the Foundation’s mission to protect and promote LGBTQIA art and artists.

2020 will also see other exhibitions mounted in honor of Tom of Finland. Reality & Fantasy: The World of Tom of Finland will open later in the year at Parco’s Gallery X in Tokyo. The exhibition puts emphasis on Tom of Finland’s role in promoting sensual and erotic depictions of the male body as a catalyst for social change and the acceptance of Gay people. Tom of Finland’s work will be seen at Art Basel in September and The Community in Paris will curate a large-scale exhibition of Tom of Finland Foundation’s permanent collection. Tom of Finland: Made in Germany will have an autumn opening at Gallery Judin in Berlin. Tom’s first ever exhibition was in Hamburg in 1976 and he did many commissions for German clients; the gallery has devoted a show and publication to these seminal years.

Two more publications on Tom of Finland will be released this year on the occasion of the artist’s birth. The first, from Like, Tom of Finland, will be released on 8th May and is an updated Finnish language book that sheds light on Tom’s private life, his art and his spirit of joyfulness; the publishers will host a Live Instagram at 7p Helsinki time. The second, a new edition of Tom’s biography from Cernunnos, Tom of Finland: The Official Life and Work of a Gay Hero, is fully illustrated and reveals a life of art, pleasure and liberation with texts authorized by Tom himself and a foreword by Jean Paul Gaultier:

I should say, if I remember right, it was in the beginning of the ’70s. I saw some drawings in Kake. It was one of those little stories that were quite funny. I just saw it and thought: “Oh my god! What is that?” I was super impressed and shocked in a very good way. I must say after that I just wanted more and more and more. The men were shown as sexy, beautiful and gentle, and almost feminine, refined, etc. It was that type of men you have to love. So it’s Tom’s drawings that show that you can be attracted to sexy men.

Men.com is releasing an anthology series based on, and inspired by, the classic works of Tom of Finland with Cory Krueckeberg, Bruce LaBruce, Terry Miller, Matt Lambert and François Sagat directing and bringing their interpretations of the Tom universe to life. Bruce LaBruce had this to say about his involvement in the series:

Tom of Finland’s drawings have always intrigued me and turned me on as a kind of burlesque of gay male sexuality. It’s a performative masculinity that also happens to be extremely hot. There is much joy in the representation, as well as an underlying current of humor and irony.

In 2017, the country of Finland celebrated its 100 years which included the release of the biopic, Tom of Finland, an account of a vital chapter of Gay history, that also had it’s own exhibition in Turku. In 2016, Taidehalli in Helsinki presented Tom of Finland: The Pleasure of Play, a major exhibition that portrayed the artist’s work on wider scale than ever seen before. This year, member organizations of the Finnish Cultural and Academic Institutes are supporting the Tom of Finland exhibitions in the United Kingdom and Japan, as is the Embassy of Finland in Tokyo.

The Finnish Diplomatic Missions in the US produce a Suomi–Finland Podcast series in English. The Consulate General of Finland in Los Angeles visited TOM House earlier this year and will release a podcast episode on 7th May, that reveals an intimate side of Tom and his contributions to society. Available on Spotify, Apple Podcasts and SoundCloud.

A memorial plaque will be placed on an apartment house where Tom lived in Helsinki, the Postal Museum in Tampere will present an online talk with Susanna Luoto about Tom’s correspondence, and MSC Finland – TOM’s Club will do an Instagram presentation of posters Tom created for his own club.

Everyone is invited to wish Tom a happy birthday with a tribute
on what ever social media platforms they use with the tag
#TOMs100.

On May 8, 2020, Tom of Finland Foundation will announce the Tom of Finland Emerging Artist Competition with its judges; a contest to encourage, showcase and reward artists.