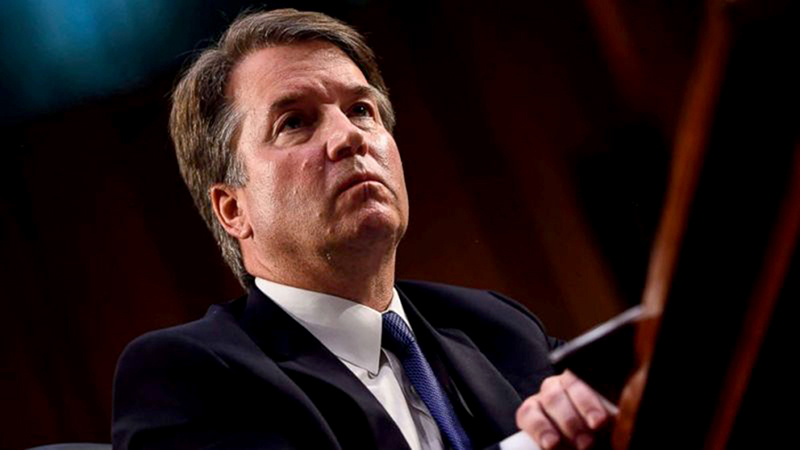 Although I originally thought Kavanaugh might be better than many others on Trump’s prospective justice list, I came to despise the man with his simpering smile and smug assumption that he belongs on the High Court by birthright.”

Before we start, I was sifting through headlines in search of grist for our LGBT mill when I stumbled upon the following Vox headline:

Seriously? Is it me? Did I miss a turning point in the development of American journalism when editors decided it would be fun to dispense with meaning in favor of inscrutable coded headlines? Is there a reason we are obliged to hit the urban dictionary prior to unscrambling a simple introduction? Even if I could figure out dox and Salt Bae, what is meant by “because 2018?” Headline writing is something of an art form, but here we have substituted piffle for poetry.

For those who care, Senator Rubio tweeted that tyrannical Venezuelan President Nicolas Maduro was having a lavish dinner at an Istanbul restaurant produced by a Turkish chef who made a name for himself when his salt shaking video went viral a year or so ago. That’s Salt Bae, and Rubio tweeted the phone number of Salt Bae’s Miami restaurant, a practice that I vaguely recall is called doxxing. Lastly, I guess Vox thinks Rubio did this as a political gesture prior to the midterms, hence “because 2018,” even though Rubio is not running for office.

In other words, “Rubio Charges Hypocrisy As Maduro Dines Out At Internet Chef’s Pricey Restaurant.” Whatever. You try it.

KILLERS? OR GAY TOURISTS? WHO KNOWS!

Okay, the grist collection includes the bizarre story of the two Russian assassins who dispensed the fatal nerve agent Novichok in Salisbury, England, last spring, in a failed attempt to kill a former spy. The men, tracked on camera by UK authorities, recently claimed in a Russian TV interview that they were sightseeing, and had traveled from Russia to Salisbury in order to visit the town’s 13th Century cathedral. When asked why they took two separate trips from London to Salisbury, the men explained that “slush” on the ground in Salisbury xforced them to cancel the first visit and return to London, even though the cathedral is a short walk, or slog, from the train station.

The interviewer reportedly implied that the men were gay, and therefore could not possibly be government agents. This despite the fact that one of the men’s listed phone number connects to the Russian Defense Ministry, and that neither man seemed to exist prior to 2009. Oh, and the men were so careless that they threw out a vial of Novichok which was then found by some guy who gave it to his, now deceased, girlfriend, thinking it was perfume. Doesn’t sound like any gay men I know.

I know this wasn’t much of a story. Just a little grist. Hardly worth getting the mill running. But we have only just begun.

I hesitate to write about Brett Kavanaugh, because you surely know a lot more about his fate than do I, laboring away as I am on an early deadline well ahead of the print date of this issue of THE FIGHT. Did the Senate ever hear Dr. Ford’s testimony? Was she credible? Did they ram Kavanaugh through the committee? Did they hold a vote? Did the GOP female Senators back him?

Although I originally thought Kavanaugh might be better than many others on Trump’s prospective justice list, I came to despise the man with his simpering smile and smug assumption that he belongs on the High Court by birthright. Throw in some evident lying under oath, inexplicable debts for a man in his position, and the frat boy mentality he still jokes about decades after the fact and you might not want him on the Supreme Court even before you consider whether or not he forcibly tried to molest a teenaged girl back in the day.

I know it’s a long shot. But I dream about winning the Senate and blocking a new justice until a Democrat wins the 2020 election. Alternatively, I’d like one of the conservative jurists from the Heritage Foundation list to get on the Court and then experience an ideological awakening and move dramatically to the left.

By the way, do you know that “bae” means “poop” in Danish? So we assume Salt Bae is not going to open any restaurants in Copenhagen, or if so, he will use a pseudonym. I guess his big Internet claim to fame is that he kind of twists his arm into a strange position before he starts shaking salt. That’s it. I wish I was in more of a professional mood considering this column is due today.

FREE TO BE, YOU AND ME

Here’s a story for us. Lambda Legal has won a $280,000 settlement for Thomas Hamm, a man who was relentlessly beaten by prison guards after he went to visit his partner on Rikers Island back in May, 2014. First, Hamm was ordered not to hold hands or kiss his partner, even though regulations permit visitors to kiss, embrace and hold hands. Then, after the visit was over, a guard called Hamm a “fucking homosexual” and proceeded to beat him so severely, he was hospitalized. After treatment, Hamm was taken back to Rikers and charged with assaulting and harassing an officer! Oh, Hamm is 5’6” and while I don’t know the specs of the prison guard, I’m guessing he was a little bit bigger.

Those charges were dropped and Hamm sued the City of New York and its Department of Corrections. His settlement also includes new specific regulations and instructions for Rikers Island staff.

I’ve got some other legal stories in the hopper, but nothing earth shattering. There’s a federal suit challenging an antigay parenting policy in Michigan, where a judge refused to dismiss the complaint. So that’s good. I’m sure there are many other items but my main sources of legal news are all obsessed with Kavanaugh right now, and I would have to dig much deeper in order to uncover newsworthy content.

And then there’s India, where the high court overturned the country’s sodomy law to much fanfare in the world’s press. You would have thought Ganesh himself descended from the clouds, picked up a gay couple with his trunk and deposited them into a sparkling diamond-studded howdah before parading them to the Taj Mahal for a massive public wedding.

As far as I understand it, the sodomy law was overturned years ago in a procedure that the high court felt was wrong, ergo it was the high court that reinstated the sodomy to begin with just a few years ago. Second, the high court ruled last August that gays and lesbians are protected by a right to privacy under the constitution, so the antigay sex law was something of an anomaly anyway.

Finally, it’s the year 2018. Are we really going to jump up and down and squeal with glee because India decided that consensual gay sex between two adults is not a crime? We went nuts over this in the United States back in 2003, but is the bar still so low? Is India so far behind? Maybe so.