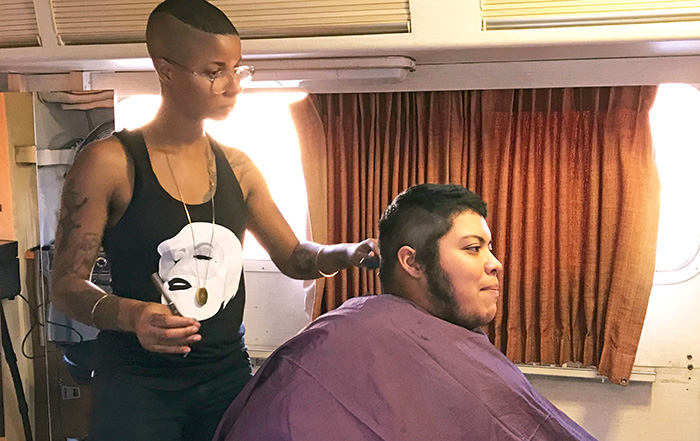 Madin Lopez Trims the Hair of One of Their Youth Clients.

On the day before Thanksgiving, as Madin Lopez (they/them/their) introduced me to several homeless LGBTQIA youth—they asked me, “Are you a good white?”

I was thrown for a second, partly because the construct made me think of Glinda’s query of Dorothy in The Wizard of Oz, and partly because I had to wonder: Am I a good white guy?

Madin explained that it wasn’t a trick question.

“I was asking if you’re a safe person to be around my youth,” Lopez said. “It also lets trans and genderqueer and gender nonconforming people know that there are some safe people who want to help them, and some who don’t. It’s important to make that distinction.”

One simple way for genderqueer and gender nonconforming youth to feel safe is for people who meet them to ask how they identify.”

I met Lopez and about two dozen youth during a daylong retreat, Thanks-living, which was held at an art studio near Chinatown in downtown L.A.

Thanks-living—the living part is about empowerment—included lessons in sexual defense, self defense and martial arts, acupuncture (to release physical and mental trauma), and hair styling sessions with Lopez and their wife, Sabine, also a stylist. The event would end with a full thanksgiving feast.

Lopez holds retreats twice a year—the May event is called “(We Don’t Have) Mother’s Day.”

“It’s the two times a year when I have the most anxiety,” Lopez says, suggesting it’s the same for the youth as well. “If you are queer you might not have family to spend the holiday with.”

The Airstream (or Hairstream, as Lopez calls it) toured to all of the California trans Pride events in 2017 and served more than 250 new clients. Lopez says they’ve seen around 700 clients this year.

Though no money is exchanged, there is a currency system for the haircuts. Clients are requested to answer a question on a white board. The Thanks-living day question was, ‘how do you show yourself through love?’

Lopez, who has a thriving practice as a hair stylist at Folklore Station in Echo Park, says it’s important to give back to the community. Now 31, Lopez suffered family rejection for being gender nonconforming, rejection many of their clients know all too well.

Lopez said that, while youth clients may not have a permanent home, they can have greater self-worth, and an expression of self-pride and queer visibility from a kick-ass ‘do.

Anthony Daniel (he/him/his) got a Mohawk at the Thanks-living retreat. “I trust Madin to do anything with my hair,” Daniel said. “Once, on one side of my head, I had them shave the word ‘queer.’ I wanted to wear that for the world to see who I am.”

Daniel added he has been inspired to do something for others, “the way Madin has done for me.”

Zahav (he/him/his) a 22-year-old trans man who was getting “the usual” do said that Madin had inspired him to be altruistic.

“I want to have the patience to teach younger and older generations,” Zahav said. “Right now, I’m about being visible. In the queer and trans community, we have always been there, but the media seems to forget about us.”

Lopez is making sure they’re not forgotten. Beyond cutting hair, they also mentor youth through an informal program they call Being a Queer Black Entrepreneur. “I show (youth) what could be simply by example, by living my life, happily,” Lopez said. “I show them ways they can do something with themselves without following the rules. If I can help them get a job, I do.”

Securing employment is often difficult for trans youth of color, and many spend time on the streets, at least for a while. On the streets they face a high risk of violence.

The 2016 Hate Crime Report, released last month by the Los Angeles County Commission on Human Relations found that crimes against transgender people surged percent in a year, with the vast majority being violent crimes.

Cory Klink, (they/them/theirs), founder of Bold Alchemy, a queer and trans self defense program, gave a martial arts training demonstration during Thanks-living. Klink said it’s crucial for queer and trans communities to know self defense, “so we can approach dangerous situations like us being aggressed on or our consent being violated or aggressive cops.”

Kling added that trans and genderqueer people must be able to “read” a space. “In my space where I’m walking, could there be someone behind me? Are there people to the left and right? And stay conscious and be in a space mentally to protect themselves.”

One simple way for genderqueer and gender nonconforming youth to feel safe, Lopez said, is for people who meet them to ask how they identify.  “It’s appreciated when you ask someone how they identify,” Lopez said. “It’s like asking for a person’s address, so you’ll know where to meet them.”

The Airstream “Hairstream” mobile salon is definitely she, and trans, Lopez added. “She transformed from being a family outing mobile to a gender affirming salon.”