This Gay Soldier’s Had a Rough First Day in the Army. | The Fight Magazine 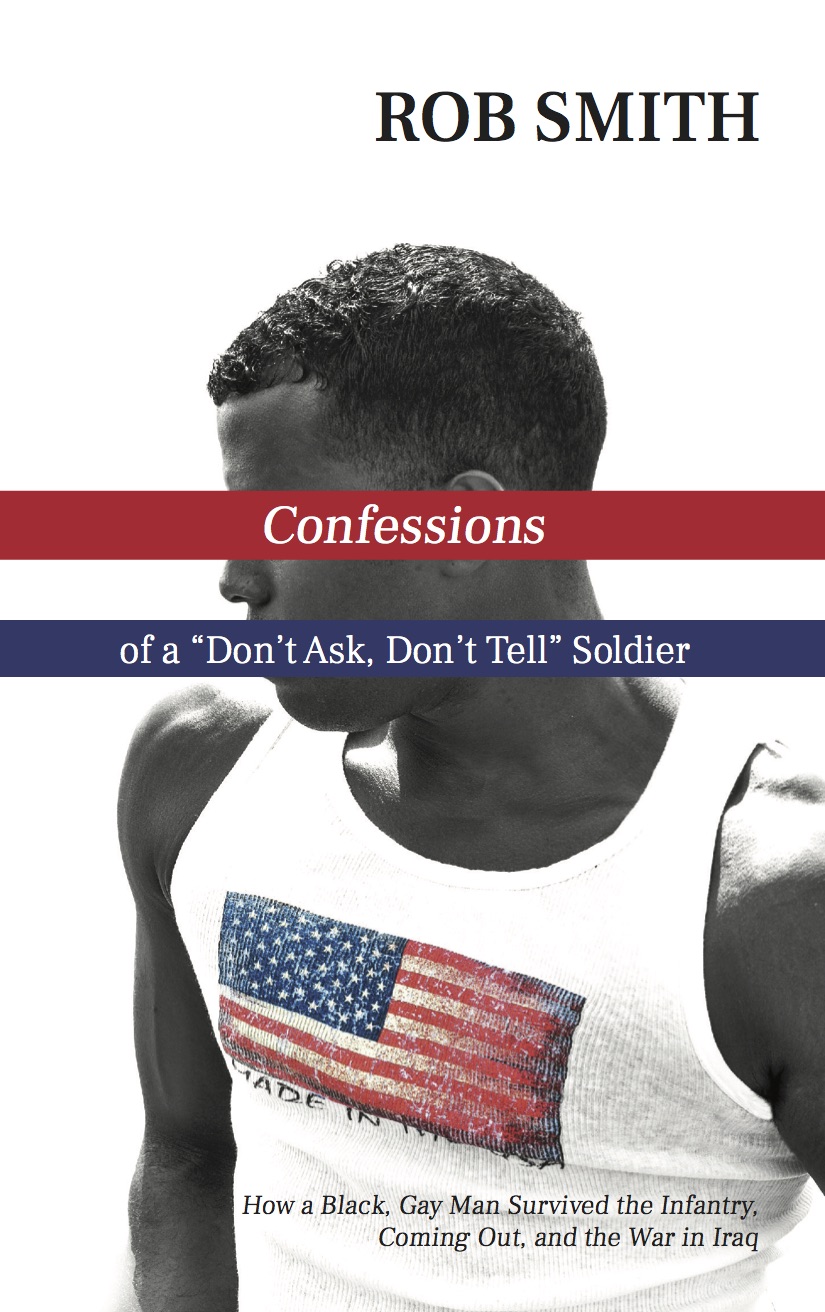 The following is excerpted from Rob Smith’s memoir Confessions of a “Don’t Ask, Don’t Tell” Soldier: How a Black, Gay Man Survived the Infantry, Coming Out, and the War in Iraq, available now from Amazon and select LGBT booksellers.

THE FIRST TWO minutes of my military experience were a blur. No sooner had I gotten off the bus and retrieved my luggage, as directed, and stood in front of it, I made the mistake of glancing at the drill sergeants out of the side of my eye. They entered the area with their chest- jutting, tough-guy swagger. They seemed somehow larger than life: tall, angry, and terrifying. These big, angry-looking white men were the opposite of the warm and caring Corporal Garvin. They meant business, and first up on the agenda was to scare the living hell out of all of us.

“Don’t fucking look at me, privates!” The first screamed.
“Look straight the fuck ahead!”
My frightened gaze inadvertently met the first drill sergeant’s hardened and steely one. I’d never seen an overweight, yet muscular, middle-aged man move as lithely as he did. He leaped over the other recruits’ bags and between their shoulders to move between the four rows of recruits and somehow place his face millimeters in front of mine in the blink of an eye.

I felt every eyeball in the room on me, the lone pepper spot in a sea of bald heads and clean- shaven white faces. I felt weak and exposed. The other recruits were doing their best to focus their attention directly forward and pretend not to notice the scene that was being performed by our new superior for their benefit. Why couldn’t it have been somebody else? I thought to myself. Why can’t I ever just blend in?

In my head I could hear my mother’s voice berating me in the loving, yet no bullshit way that had guided me to a near-relentless pursuit of academic success in high school.

Just couldn’t look straight forward, huh? Why can’t you ever fucking listen? God, how I wish I had listened when the Company Commander at the recruiting station back in Ohio taught us how to stand “at ease” with our hands interlaced along the smalls of our backs and told us to look forward no matter what.

The drill sergeant looked at me, studying me. Although I was trying to maintain my forward gaze. I realized it was bordering on the impossible, and decided on a split-second act of defiance. I looked him directly in the eyes, trying desperately to swallow the fear that enveloped me. Maybe this old bastard would respect me for it. Maybe he would think I’m not someone to be fucked with. Maybe I could get his old white ass to think I was some thug from the projects of Detroit instead of a solidly lower-middle class geek from Ohio with a two-parent family background that was like The Cosby Show. Well, maybe The Cosby Show if neither of the kids were Cliff’s and he was a control freak who beat the shit out of Claire.

I studied the drill sergeant while trying to maintain my gaze. His face was wide and heavy, as age had obviously crept in and started the inevitable decline in his looks. His face was heavily lined, his chin was weak and his cheeks sagged. The ridiculous drill sergeant cap, which most closely resembled an upside down bowl on top of a plate, placed an ominous shadow over his hollow eyes. As I looked into them, using every bit of my resolve to keep his gaze, I sensed a white-hot hatred that simmered below the surface. I engaged him there for what seemed like hours, giving him my brand new—don’t fuck with me—look. In my mind I thought of every rap video, every “hood” movie I’d ever seen with a young black guy killing someone, selling drugs or robbing someone, men who I was told by my thuggish cousins that I could never be like because I liked books instead of rap music, writing instead of sports.

The drill sergeant’s eyes twinkled and a smile spread widely across his lips. Suddenly, I was afraid, and I felt a wave of fear unleash within me. I knew what was coming, which was possibly the worst thing that could come out right now. This had followed me since the sixth grade in Ohio, and it appears that it just hopped the flight down to the South. He looked directly at me with that—you’re fucked—grin for a few moments more, then stepped back to make his pronouncement to the roomful of recruits that I would be spending the next six months with.

“What are you, a fucking faggot?” He said.

It was less of a question and more of a pronouncement, made loud enough so that everyone in the staging area could hear it. “This motherfucker was eyeballin’ me because he’s a fucking, faggot! Yeah, that’s what you are, right?”

For more on coming out, life in the Army, and what it’s really like to deploy to Iraq, check out Rob Smith’s memoir Confessions of a “Don’t Ask, Don’t Tell” Soldier: How a Black, Gay Man Survived the Infantry, Coming Out, and the War in Iraq, on sale at Amazon and select LGBT bookstores now.
https://www.amazon.com/Confessions-Dont-Ask-Tell-Soldier-ebook/dp/B0752MCH5W/ref=tmm_kin_swatch_0?_encoding=UTF8&qid=1503574379&sr=8-1