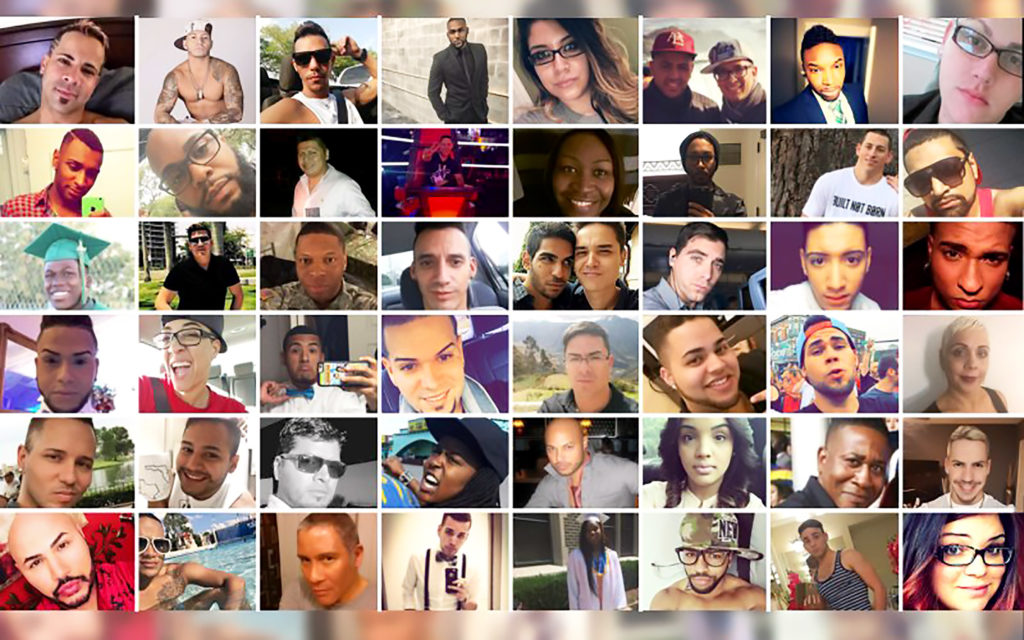 If you are white and cisgendered, and living in a big city or on the coasts, it has become easy to forget how hated we clearly still are, and the madness that infects the world.

The evening of the deadliest incident of violence against LGBTQ people in U.S. history took place I was staying at my mom’s place in Palm Desert—a little slice of suburb tucked halfway between Palm Springs and Indio in the Coachella Valley. When I woke up the morning after the massacre my mom called me into the living room. She took me by the hand and told me that there had been a shooting at an Orlando gay club. People had been killed.

I’m ashamed to say my initial reaction was a vague shrug; people get shot every day after all, this is America. I had thought maybe a couple of queens had gotten into an altercation and felt the need to express the size of their dicks with lead and violence, or maybe… it doesn’t matter what I thought it might be.

Omar Mateen… tried to put us back in our box… that box will no longer contain me. I’m not going back. WE are not going back, but we need to stand together.”

The reality—that a broken young man named Omar Mateen walked into a club where he was possibly a regular and in the course of a few short hours brought anguish and terror into the lives of more than 100 queers—was so much worse than I could have ever imagined. Nothing in my life up till now has remotely prepared me for Orlando.

I spent a majority of the next eight hours watching cable news, shaking and chain smoking with a wet face and aching heart. I watched as images of young queers carrying their wounded friends flashed across my parent’s big screen TV. I pictured my friends in their places, and texted every faggot I love, just to let them know that I love them. To try and feel a little bit less alone.

I honestly held it together pretty well until one of the first responders came on and spoke of the hellish cacophony that’s born from more than fifty cellphones ringing out in room full of dead bodies; mothers and fathers and lovers and friends trying desperately to reach the most important people in their lives, hungry for answers. I pictured my mom making that same call, not knowing if I was alive or dead—the panicky fear mixed with desperate hope—I broke into inconsolable sobbing.

Throughout the next few days I obsessively flipped between the three 24 hour news channels—Fox, CNN and MSNBC—desperately searching for new details in the hopes that next one would fill in the puzzle enough that I could understand, that I might be able to make sense of this tragic loss and see the big picture.

The coverage on MSNBC and CNN focused primarily on guns, and the pathological ease with which nearly any American can get their hands on assault weapons and hollow-point ammunition designed explicitly for the killing of other humans. And it makes sense, the Pulse Massacre marked both the 15th time the president has been forced to speak after a mass shooting, and the single largest mass shooting committed in American history.

The Democrats, to their credit, have seized on this crisis to push for long overdue reform to our national gun laws, they even staged a sit-in on the floor of the House, which was completely ineffectual at passing law, but it at least showed a measure of determination rarely seen in D.C.

Unfortunately, their solution to the gun problem is to ban some scary-looking guns which (statistically speaking) represent a tiny fraction of gun deaths in America. They’ve also proposed forbidding the sale of guns to individuals on the No Fly and Terror Watch lists, which makes a kind of sense until you stop to think about how how arbitrary and devoid of due process these lists are. Even sitting congressmen like the late Sen. Ted Kennedy and Rep. John Lewis, the leader of the Democrats sit-in, have been accidentally placed on the No Fly list, and they both had mountains of trouble getting themselves removed. And if you still think it’s a good idea, ask yourself if you want President Trump to decide who can have a gun in this country and who can’t?

For the gang at Fox News and their carefully curated talking heads this was first and foremost an act of ISLAMIC TERROR. (All caps, period, full stop.) And this makes a kind of sense, it was an attack carried out by a man who pledged allegiance to the Islamic State and a number of other radical Jihadi organizations, some of which it should be noted are exceedingly hostile to one another, but all of which share an animosity toward the United States and The West. The fact that Pulse was a gay club was mentioned so seldom that many of my parents’ friends had no idea, despite the fact that the Orlando massacre dominated that channels coverage for three days.

Republicans were quick to blame Obama, who acknowledged that the Pulse Massacre was an act of hate and an act of terror, but he didn’t say ISLAMIC terror (so of course he’s in league with the enemy.) They ignored their role in watering down the nation’s gun control laws, and laughed off the notion that they’ve contributed to a cultural climate where killing queers is okay. The way in which they erased us from our own tragedy even as they put it forward as a casus belli to ramp up mass surveillance and bomb even more poor brown people living in the Middle East was stomach-wrenching.

The narrative out of the Gay Media has largely (and understandably) been a focus on the role that hate and homophobia played in the attack.

There have been reports that Omar Mateen was offended by the sight of men kissing, or maybe he was a closeted homosexual, perhaps he was trying to impress his abusive father, there are even reports that he had been exposed to HIV and was seeking to take out his fear and self loathing out on the entire queer community; and really, none of these is mutually exclusive. There are so many contrary stories about Omar Mateen, one wonders if anybody really knew him at all.

This narrative was reinforced by the way Republican politicians almost universally failed to acknowledge that Pulse was a massacre of the LGBTQ communities. And further underscored by those same politicians’ refusal to pass legislation, put forward the week after the shooting, which would have barred federal contractors from getting government work if they discriminate against the LGBT community.

And there are two more threads which seem to have been barely acknowledged: Omar Mateen’s mental health and the fact that those he killed were not only queer but also mostly brown-bodied.

The sad truth is that everybody is at least partially right, all of these threads together somehow add up to the truth. None of these narratives—taken separately—can hope to address the enormity of the crisis facing this county or the West as a whole. Regardless of Omar Mateen’s specific motivations, we live in a world where queers are vilified by pastors, pundits, and politicians, where guns are easier to access than healthcare, and where zealots in far away lands are using the internet to preach salvation to disaffected young men willing to wage holy war against The West and our “decadent values” of tolerance and liberalism.

In the immediate aftermath of the Pulse shootings, as my mother and I watched an endless stream of cable news, she looked at me and said, “If any good comes out of this senseless tragedy, let it be that the whole country rallies around the Gay community.” And while clearly the whole country doesn’t have our back, there have been many hopeful signs: reports of lines at blood banks winding around blocks, President Obama’s naming of the area around the Stonewall Inn as a historical landmark. Famous rich guy Mark Cuban’s donation of $1 million to the Dallas police to support increased security for local gay bars. And that’s all really great, I feel the love and it is appreciated. But for my part, the good I want to see out of this tragedy is for the LGBTQ communities to rally around each other.

We queers have had it relatively good for what seems like a very long time. It’s been years since I’ve been afraid to hold hands with another man in public, or be honest with a stranger about who I am and the work that I do, even in the heart of the South. But I know that sense of safety has not been extended to every member of our tribe. If you are white and cisgendered, and living in a big city or on the coasts, it has become easy to forget how hated we clearly still are, and the madness that infects the world. For our trans, black and brown-bodied siblings that fear is lived with every day.

At the Pulse nightclub Orlando, Omar Mateen unleashed his madness on us. He wanted to remind us of that fear. He tried to put us back in our box. I’ve become accustomed to not living in fear, I’ve grown comfortable in my honesty, and that box will no longer contain me. I’m not going back. WE are not going back, but we need to stand together.