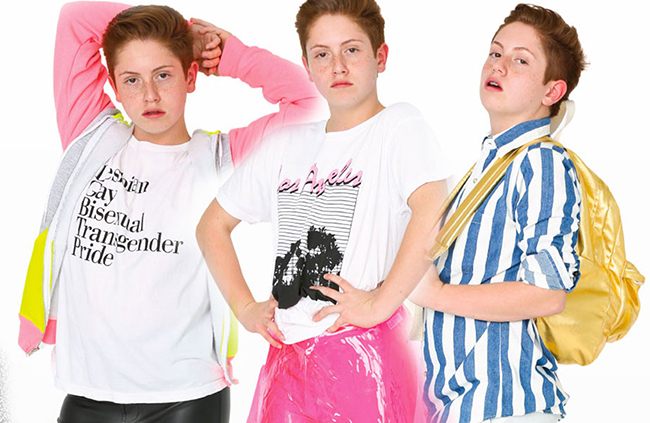 THE KIDS ARE ALL RIGHT

Whatever the future holds for Brendan Jordan, 2014
was a fierce year for this unapologetic little diva.

Brendan Jordan is that 15-year old diva kid from Las Vegas who shot out of a bedazzled rock and into viral super-duper stardom after he photo bombed a newscaster at a mall.  He stood out of a crowd of screaming little girls with impromptu dance moves and various poses that reminded me of Madonna’s Vogue video, but it turns out he was actually channeling Lady Gaga’s  “Applause” video (moving along).

A lot has happened since he first introduced us to his stank face last October. The video has had well over 3 million views, he’s nearing 300,000 followers on Instagram, he was a guest on the Queen Latifah Show, and he must’ve peed in his fishnet stockings when the one and only Mother Monster sent him a shout out via Twitter, which catapulted his Twitter followers to 40K.

Jordan ended 2014 with an American Apparel ad campaign after he expressed his undying love for the brand in his youtube video – he uses his video blogs as a platform to raise awareness for LGBT issues and empower LGBT youth not to smoke, not to do drugs, and to love themselves.  He uses the word “like,” like a lot in his videos. He talks about fashion, reads fan mail and he really is a ton of queeny fun.

The American Apparel ads feature Jordan looking pretty in pink, wearing tights and there’s even a cute shot of him in a see-through skirt, because he’s not one to conform to boy’s clothes. Again, his poses in the photos smack of Madonna circa 1980s, but in all fairness, the kid hadn’t been born yet, so Lady Gaga can have this one.

They don’t make 15-year olds like they used to when I was growing up. Jordan looks prepubescent. I thought he was 12. Most would peg this androgynous ginger kid at a disadvantage from a superficial viewpoint, with his big metal braces, fiery freckles, and hints of baby fat, yet he appears to be so comfortable in his own skin, he channels so much positive energy, inner fierceness, and has such a sense of humor about himself, that you can’t help but fall in love with him and root for him, despite his devotion for Gaga (kidding).

He’s honestly the kind of kid I would have naturally gravitated towards when I was little, but I was never allowed playing with, because his gayness was so obvious and my gayness was always under suspicion.

Jordan joins the ranks of modern day gaylebrities who are famous for being famous. What makes his story inspiring to me is the cast of characters in the background who support him for being his big gay fabulous self. Jordan is half Peruvian (I’m not sure what makes up his other half) and according to his video blog, his parents have been very supportive of his gayness. They took him out for sushi and encouraged him to come out of the closet. His father said he was excited for him after Jordan revealed he had feelings for other boys. Dad being Hispanic and pro-gay is a welcoming shift in the winds between fathers and gay sons. I wonder if that video would have ever happened if Jordan had to hide being gay from his folks. Of course, be yourself, doesn’t mean be like Lady Gaga, but what would our childhoods look like if we have been encouraged to be our true authentic selves?

Like Jordan, I was in the nightly news once. My mother caught a glimpse of me standing in line outside the Cinerama Dome in Hollywood to watch Madonna star as Evita back in 1995. Mom was not amused, and I was just standing there with a bunch of men who may or may not have been gay. She would have stuffed me in a bag and thrown me into the LA River had I started voguing and throwing stank faces at the camera, but those were different times and she’s become more accepting in these modern days.

I wonder what gay kids think of Jordan. I wonder if they see him as a beacon of hope, or if they recoil with embarrassment. Does he give gay youth a false sense of security? Are gay kids today really this open about their gayness, or is Jordan a special case? Jordan speaks of how he like, likes boys, but I wonder what his life will look like after he truly discovers his homosexuality in all its homo sex glory? Pink see-through skirts are cute and all–they make a cool fuck-you statement, but I’m forced to wonder, do they get you laid?

Whatever the future holds for Brendan Jordan, 2014 was a fierce year for this unapologetic little diva. His massive popularity tells me that we can relax a little. I think the kids are going to be okay.