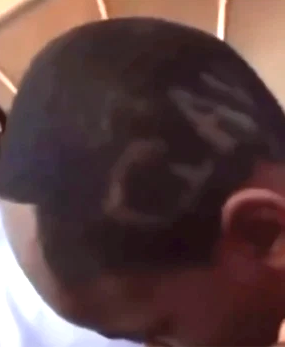 Disturbing video shows a 12-year-old boy with the word “gay” shaved into his hair being verbally and physically abused by three adults, reports the New York  Post.

The footage, posted to Instagram last month, shows a young boy, identified in reports only as Tyler, cowering on the porch of an Atlanta home as he’s berated by a man who makes reference to sexual orientation.

“You still doing gay s–t,” he tells Tyler in the clip, which was posted by Gaye Magazine on June 17. “You think this on the side of your head for no reason?”

The man then smacks Tyler while holding him by the neck.

Cops in Atlanta learned of the video the same day it was posted and arrested three people involved in the upsetting incident.