The Empress Is Dead | The Fight Magazine 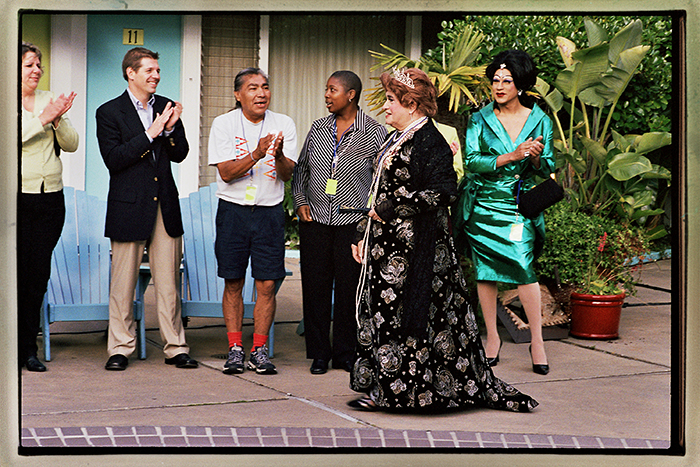 Though he’s largely unremembered outside of some history-minded homosexuals and members of the Imperial Court System he founded, drag activist José Julio Sarria is a pioneer of LGBTQ rights who deserves to be exalted along with the likes of Marsha P. Johnson, Sylvia Rivera, and Harvey Milk.

Born in San Francisco in 1922, Sarria displayed a love of women’s clothing from an early age. After serving honorably in World War II he returned to San Francisco in 1947 to pursue an educational career, but a soliciting conviction derailed any hope he had of being a teacher—so he turned instead to drag.

By the early 1950s Sarria had become the City’s most prominent drag performer. And when he wasn’t singing campy covers of classic operas from the stage of the legendary Black Cat Night Club, he was organizing his fellow homosexuals against the violence of a corrupt San Francisco Police Department and the criminalization of queer people.

”I think for us to look back at his take of being super political at a time where just being out and being gay was actually illegal, was a huge stance, and using drag as the vehicle to do it. We’ve seen throughout our history that that has been where a lot of our leaders have come from, and how things start and how riots start. Looking back on José’s history for me, that inspires tons. I see lots of meaning in what Jose was doing.” —Juanita More, Drag Icon.

Sarria became the first openly gay man anywhere in the world to run for public office in 1961 when he campaigned for a seat on the San Francisco Board of Supervisors. He didn’t win, but came in 9th in a field of 32 candidates, proving that the gay community could be effectively organized—a fact Harvey Milk would eventually leverage to win a seat on the Board in 1977.

In May of this year at the District 8 Supervisor Rafael Mandelman, with unanimous consent from the Board of Supervisors, passed a resolution urging Governor Gavin Newsom to induct Jose Julio Sarria into the California Hall of Fame.

”The early 1960s were a more progressive era, obviously, than what the ‘50s had been, and San Francisco already had a reputation as being somewhat of a bawdy town where anything goes. I guess what I want to say about Jose Sarria is the same as Harvey Milk—they’re a product of their age. That it made it possible for them—this place and this time made it possible for them to take that step. My mind jumps to Pete Buttigieg today.” —Terry Beswick, GLBT Historical Society Executive Director.

In 1964 Sarria crowned himself Empress José I, The Widow Norton (a nod to that most beloved of 19th-century San Francisco eccentrics, Joshua Norton, who—after a nervous break down—had declared himself Emperor of the United States and Protector of Mexico.) and ushered the Imperial Court of San Francisco into existence. By the time of his death in 2013 at the age of 90, the Imperial Court system had spread to 68 cities across the United States, Canada, and Mexico, and had become widely recognized as one of the oldest and most venerable LGBTQ charitable organizations in the world.

José Sarria was a trailblazer in every sense of the word and has been a role model and hero of mine from the moment I first learned about him. He’s as radical a queer politician as there has been—and he was our first. To use your platform as a drag queen fighting against the 1950s criminalization of queerness to launch the first campaign for public office by an out LGBTQ person is…beyond. Each and every one of us queer candidates for office who has followed owes him a debt of gratitude for the force with which he busted through that rainbow ceiling.” —Tom Temprano, CCSF Trustee

But now this remarkable drag activist is finally getting the recognition he so richly deserves. In 2015 the sprawling network of nonprofits he founded became the focus of an award-winning documentary, Fifty Years of Fabulous. And in May of this year at the District 8 Supervisor Rafael Mandelman, with unanimous consent from the Board of Supervisors, passed a resolution urging Governor Gavin Newsom to induct Sarria into the California Hall of Fame.

The Empress is dead—long may she live in the hearts and minds of queers and misfits the world over.