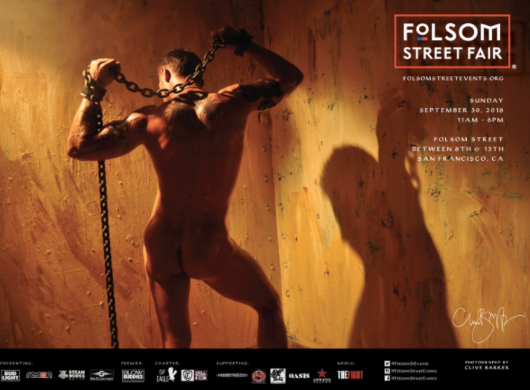 Folsom Street Events is proud to announce that the 2018 Folsom Street Fair and Magnitude posters will feature original images by writer, film director, painter, and photographer, Clive Barker. The images have been selected from the never before seen photographic series titled, Imagining Man.

Clive Barker is one of the premiere names in horror and fantasy. Born in Liverpool, England, Barker started his career as a director, and playwright, for a small theater group in London. In his spare time, Barker began writing short stories that were published in various magazines. These stories were then published as a three-volume set titled The Books of Blood. Eventually he began writing full-length novels. Their success enabled Barker to begin his film career as a writer and director. In 1987, Barker redefined the horror film genre with the release of Hellraiser. The film’s success lead to adaptations of his work Nightbreed, Candyman, and Lord of Illusions. He was also the executive producer on the Academy Award winning film, Gods and Monsters. Additionally, Barker is a gifted visual artist. Often illustrating his own books, Barker’s paintings are best viewed in his series, The Abarat Quintet. His paintings and illustrations have also been featured in galleries across the United States. The bulk of Barker’s ground breaking erotic photography has, before now, never been seen.

“The organization’s Executive Director, and Board of Directors, has invited me to bring my art to Folsom,” says Clive Barker. “As an artist who has always played on the edge of public taste, I feel very comfortable in the company of the extraordinary people, especially LGBTQ individuals, who are living lives that are transforming our culture. I’m so proud of our community. Thank you to Folsom, my brothers, my sisters, and non-binary and gender non-conforming siblings. I love you.”

Finger also adds: “The posters are just the beginning of our partnership with Clive Barker. We have much more in the works. Stay tuned!”

Folsom Street Events receives support from Grants for the Arts for its stellar live music at Folsom Street Fair. 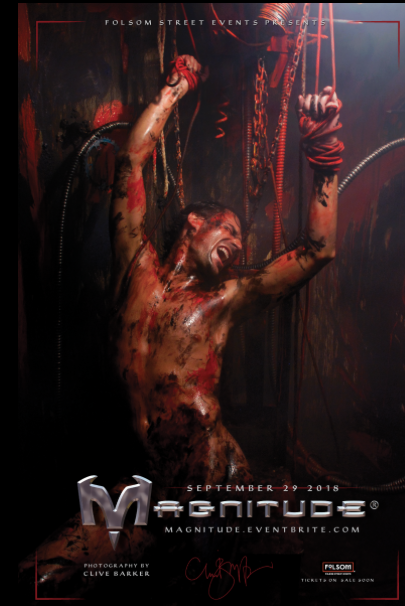