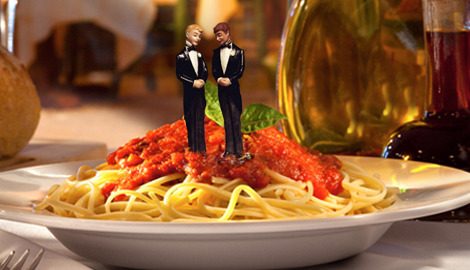 The pasta company Barilla, whose chairman, in the past, voiced extremely anti-gay views, is opening a restaurant on the campus of the University of Southern California. The company claims it has had a change of heart. In the years since the homophobic remarks, the company appointed a Diversity and Inclusion Board and earned a perfect score several years in a row on HRC’s Corporate Equality Index, which tracks corporate policy for LGBTQ people, reports LGBTQ Nation at www.lgbtqnation.com.

[The University of Southern California] finished work on its $700 million “USC Village,” a commercial area open to the public during the day. Many big retail chains are moving into the space, including Trader Joe’s, Target, and now Barilla.

In 2013 the chairman of the pasta company, Guido Barilla, told a radio station that his company will never feature LGBTQ people in its ads.

“I would never do an ad with a homosexual family… If the gays don’t like it they can go an eat another brand.”

“For us the concept of the sacred family remains one of the fundamental values of the company,” he said. “I have no respect for adoption by gay families because this concerns a person who is not able to choose.”

Several days later, Barilla apologized in a Facebook video, saying that he planned “to meet representatives of the group that best represent the evolution of the family, including those who have been offended by my words.” That didn’t stop calls for a boycott of the company.

In the years since then, the company appointed a Diversity and Inclusion Board and earned a perfect score several years in a row on HRC’s Corporate Equality Index, which tracks corporate policy for LGBTQ people.