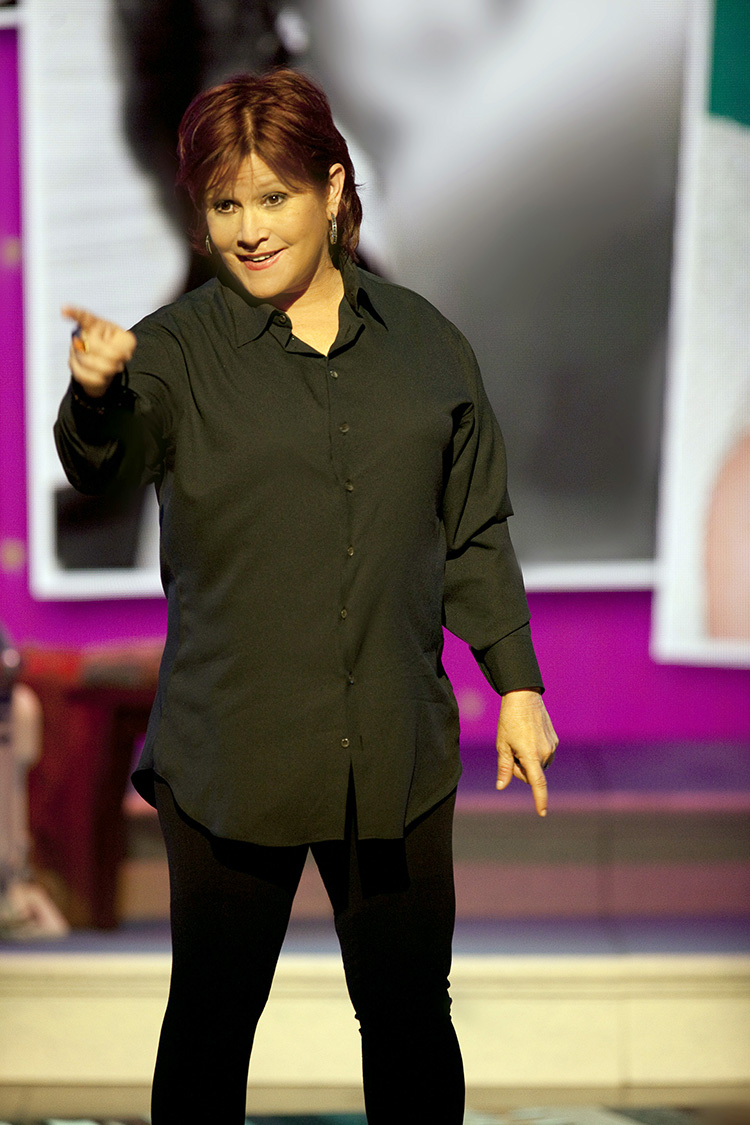 She invited us to look at ourselves outside of ourselves using her own life as an example, and saw that in that moment, we’re able to laugh at the insanity of our own folly.

When I was seven years old I sprawled out on the living room couch and lay in silence for a moment. Pretending to hear the noise of an electronic door whoosh open, I lifted my head wearily and placed my elbow on my hip. “Aren’t you a little short for a storm trooper?” I said to no one in particular. Later I would watch Carrie Fisher in real life, “like real life is this other thing, and we’re always trying to determine what’s going on in this distant, incomprehensible place” (Wishful Drinking), cracking jokes about addiction and growing up in a Hollywood maelstrom.

I once procrastinated a term paper in college watching Wishful Drinking over and over again, a pirated version of the HBO Special with Spanish subtitles. I drank it up like medicine because when you live in a world of dysfunction (and last time I checked, we all do) perspective is the only thing that can save you. And with perspective, “…time passes and you go to the funny slant, and now that same thing can no longer do you any harm” (Wishful Drinking). I love the sound of Carrie Fisher’s voice because I know, when I hear it, I’m going to laugh. That, or I’m watching Star Wars and who could possibly feel sad doing that?

Carrie Fisher invited us to look at ourselves outside of ourselves using her own life as an example, and saw that in that moment, we’re able to laugh at the insanity of our own folly, no matter how tragic the circumstances. A common theme in her work is referring to herself as Carrie Fisher the character versus “Carrie.” She says, “What you’re watching right now is me talk about myself behind my back. Now if Carrie ever found out that Carrie Fisher is doing a solipsistic, people pleasing show like this, she would be so humiliated!” (Wishful Drinking). Susanne Vale, the largely autobiographical character in Postcards From the Edge and The Best Awful does this frequently as well. En route to a fancy showbiz dinner party in Postcards From the Edge, she examines her own self-punishing nature; “Sometimes when she looked in the mirror she thought, ‘Sure, that girl is attractive. She looks good.’ As soon as she walked away from her reflection, though, she added ‘But I’m not.’” (Postcards From the Edge). This fear that we are just watching ourselves walk through life, that we have nothing to do with our own best qualities and accomplishments, the base of which is the fear that we never truly know ourselves, Fisher captures so astutely. But she doesn’t just point to the problem, she offers the solution. If she’s able to be honest about her past, confront her present and move forward to the sound of roaring laughter, can’t I? In spite of the cynicism, or perhaps not in spite of but rather in synergy with,  there is a powerful optimism that persists through Fisher’s somehow uplifting anecdotes. It has, for lack of a better word, carried me through my young adult life, my own struggles with addiction, my own lack of conviction that there is any right way to experience the complicated world that seems to just clumsily roll on whether we want it to or not.

I never met Carrie Fisher, but I’m deeply saddened by her passing. She has shaped my life for the better, which I can only assume means she’s done the same for many, and I am still mourning the departure of a spirit so powerful, so deeply meaningful and intelligent. When I was seven, Princess Leia saved me from the Imperial forces. When I was twenty, Carrie Fisher saved me from myself. I will continue to cherish everything her work has taught me as we march on from the insatiable hellfire that has been this last year into a future daunting and uncertain. Carrie Fisher reluctantly accepted that she was a “survivor” (“and who here over forty isn’t?”).

I will do my best to honor her memory by surviving and emerging from the dark times in life with a sense of humor because, after all, as Fisher recounts her mother saying: “Well dear, what are the choices? Not surviving?”