They Kill Gays, Don’t They? [cover feature] | The Fight Magazine 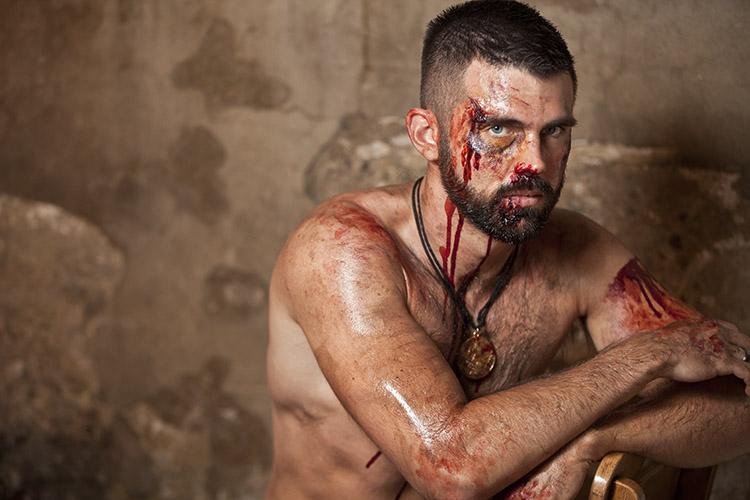 I have always contended that International Mr. Leather (IML) is the Grand Poobah of leather contests, and its winner the king of that title universe. Perhaps an exaggeration, but it’s always felt that way to me. The current IML is Patrick Smith, who also happens to be Mr. Los Angeles Leather 2015.

When you meet Patrick, you are of course struck by his almost overwhelming beauty. His handsomeness and muscled body are not easily ignored. Like so many beautiful people, it might be easy to discount him as just another pretty face and body. You would be wrong. Patrick is indeed the whole package: handsome, muscled, friendly, charming, engaging and quite intelligent. I hate him (just kidding).

THE FIGHT Magazine has given me the distinct honor of interviewing Patrick for this issue and as you’ll see as you read further, that honor was deepened by having the privilege of asking questions of someone who clearly has his head screwed on well and understands the leather and kink scene as well or better than most.  I think you’ll enjoy this brief exposure into the mind of the current IML.

Before we begin with personal questions—can you tell us about this issue’s cover photo?

One of the goals of my title year has been to raise awareness for the violence and persecution facing sexual minorities in countries abroad. This is why I took the IML sash to places such as Uganda, Egypt, Ukraine and other places where being openly gay may well be a death sentence. Unfortunately, the threat of assault is a daily reality in these countries, and while I have never personally experienced horriﬁc violence such as this, I think it’s important we remember it is happening on a daily basis. We must work to do something about it, which is why I’m so proud that Sexual Minorities Uganda is one of the beneﬁciaries of Los Angeles Leather Pride this year. We have it pretty good in the West, and it’s time we did more to help out our LGBT brothers and sisters abroad.

How do you juggle home life and your career while traveling so much during your title year?

It’s been a challenge. I’m on track to spend just over 30 weekends of my IML year away from home. I cannot stress enough the importance of having a supportive partner to go through this with. I would have gone crazy without Michael.

It was easy, actually. Canada has a very different education system and set of values when it comes to sexual orientation. I was taught in elementary school that some people are gay, some people are straight, and there’s nothing we can do to change that.

When did you come out as gay, and kinky, and what was that process like?

I came out as gay when I was 21. I have the exact date tattooed in roman numerals on my right oblique. It was personally challenging, as it is for everyone, but I had a strong support network including my parents, grandparents and friends. As for my kinky side, I never really had a “coming out” per se. With me, what you see is what you get. I’ve never made an effort to hide my sexual proclivities. I’m an open book. Just ask.

For someone who has not been to IML, why should they go?

Go to immerse yourself in the leather scene and experience true and unapologetic sexual freedom, which is the leather community’s greatest gift to the world. I wouldn’t even say that you must attend the contest. Go for yourself, have fun, and if you happen to experience the contest, that’s great too.

Chuck Renslow gave a speech at IML 2014 in support of PrEP, the once-a-day pill to prevent HIV infection. What are your views on PrEP and the current state of HIV prevention in general?

I’ve been on PrEP for more than two years now, so I was an early proponent. It’s been an absolute game changer in HIV prevention. Now we need to make sure everyone who wants access to it gets access to it. It is a liberating feeling, having guilt-free spontaneity returned to sex.

What was the most memorable experience during your travels?

There have been so many. But the most memorable was standing on the steps of the U.S. Supreme Court, wearing the IML sash, when the same-sex marriage ruling was announced. You couldn’t help but cry. We’ve come so far in such a short time.

When and how did it become clear to you, if it ever did, that being IML would ﬁt into your plans for yourself and your life?

I never had any grand design to be IML, or to be a titleholder for that matter. But after I won Mr. Eagle, a contest I entered mostly for fun, I decided I wanted to take a very serious run at winning Mr. Los Angeles and winning IML. My inspiration was seeing what Eric Paul Leue had done with the Mr. L.A. title, how he was able to make a difference with that platform and how it transformed him personally. I wanted to follow in those footsteps.

For doing things a little differently and taking the leather community to places it doesn’t usually go, beyond just leather contests and weekends. And that hopefully I made us a little more “big tent.” This goes both for my international travels to Uganda, Egypt, and elsewhere, but also by showing up in my sash at events and places that people might not expect such as awards galas, political fundraisers, the whole bit. Hell, I even spoke at a Sunday morning church service wearing full leather!

What has been the most frightening part of your IML activities?

Crossing through customs into Uganda, where gay people are beaten and thrown in jail every day just for being who they are.

What has been the most rewarding?

The friends I’ve made. The title lasts a year, but the relationships are forever. A runner-up answer would be getting recognized in public, sometimes halfway around the world, without wearing any sort of IML identiﬁers. That’s a really cool feeling. You need to pinch yourself when that happens.

What do you wish you had done differently?

I have absolutely no regrets, only choices made and a fantastic year to look back on.

Do you feel a leather title represents a sexuality, an identity, a lifestyle, or some combination?

It really depends on who the titleholder is and what they choose to make of it. Some are focused solely on community service, for example, while others use it to have fun and express their sexuality. For me, I feel that titleholders should be sex symbols ﬁrst and foremost. A leather titleholder is a representative of a sexual community, and that should be embraced as #1 by the man or woman behind the sash. Secondary to this, for me, are elements of service, education, and so on. But sex comes ﬁrst. It’s what this community was founded on.

Do you have role models, and if so who are they?

My grandfather, who was so understanding when I came out to him and who displayed so much courage throughout his life. He was shot out of his bomber jet in World War II and survived crashing through the ice of a frozen lake in France. I wear the pin he was awarded around my neck at all times.

If you were to identify one thing that could be done to improve the lives of leatherfolk and kinksters, what would it be?

We can always use more visibility. Even within the broader LGBT community we are not fully understood, which is something I’ve tried to use my title year to address. There is much talk of the difﬁculty of the “second coming out,” or coming out as kinky. It really shouldn’t have to be difﬁcult. I think raising the proﬁle of the leather scene and destigmatizing it would go a long way.

During your many travels, is there any one story that stands out in your mind as encapsulating of the importance of your IML year?

Shortly after winning I was walking around the House of Blues, which was hosting the ofﬁcial IML victory party (my victory party!). A stranger came up to me, looked at my sash and gold medallion with a sense of bewilderment, and said, “Wow, look at you. Did you win something?” It was, shall we say, a sobering moment. But the takeaway was this. While we titleholders may be important, we’re not that important. We must remember that we are one small part of a giant, diverse community.

The “leather” scene isn’t all about leather anymore. How do you feel about that?

I feel ﬁne about it. To me, the leather scene is more about an attitude of unapologetic sexual expression than it is about the material itself.

What would you say to the older people in the scene who have had a difﬁcult time adapting to the new ways of being kinky?

Everything changes. It’s just how things go. And the older people can choose to adapt, but they certainly don’t need to. So long as there is an understanding that we are a big tent community, and that kinks change and evolve, we’ll be just ﬁne.

What would you say to the younger people just coming into our scene to make their entry a bit easier?

Find some great people you connect with, to help show you the ropes (pun intended). It’s helpful to have people you trust implicitly when taking this journey.

Thank you, Los Angeles, for sending me on the most incredible ride of my life. And have fun with the next guy!