In terms of debating LGBT issues at the Oscars, to my way of thinking, the issue of recent trans characters in huge projects being played almost exclusively by cis-male heterosexual actors strikes me as slightly more relevant than which gay white man won an Oscar first. HOWEVER, it is worth pointing out that it is true Sam Smith did technically misquote Sir Ian McKellen, who stated that the Best Actor category had never been claimed by an openly gay man

“I read an article by Sir Ian McKellen and he said that no openly gay man had ever won an Oscar and if this is the case, even if it isn’t the case, I want to dedicate this to the LGBT community all around the world. I stand here tonight as a proud gay man and I hope we can all stand together as equals one day, thank you so much.”

Naturally Dustin Lance Black took to twitter, since Sam Smith’s simple speech was obviously an attack both on the history of gay men at the Oscars and Black’s pending marriage to Olympian Tom Daley:

I suppose I missed the part where Sam Smith both texted Tom Daley mid-speech and stated that he was not well-versed with Dustin Lance Black’s specific career achievements, but Dustin Lance Black clarified with a follow-up attack on Sam Smith’s LGBT literacy:

I also suppose it’s reasonable that Dustin Lance Black didn’t have the time or wherewithal to specify any previous Gay Oscar Winners, since his schedule is busy with him looking through his fiance’s phone, but a more polite thing to do may have been to point out two openly gay people who have won specifically in Sam Smith’s category in the past:

Melissa Ehteridge in 2007 won “Best Original Song” for “I Need to Wake Up” in An Inconvenient Truth. Ehteridge came out as a Lesbian in 1993 at the Triangle Ball celebrating Bill Clinton’s Inauguration.

Howard Ashman won two Academy Awards, one for “Under the Sea” in 1989 for The Little Mermaid and one for the title song in Beauty and the Beast in 1991 . Sadly he was unable to accept his award for Beauty and the Beast because he died of AIDS and wrote the lyrics for the Disney hit from his deathbed.

Sir Ian McKellen himself stated that he didn’t think the misquoting of his interview with The Guardian should detract from Smith’s achievement. This brings us back to the notion that LGBT rights, including cultural rights—the opportunity to be represented in the film industry by Queer artists—is an “US” issue and not so much a “ME” issue.

It’s curious that Mr. Black chose to link specifically his own win instead of taking a teachable moment to shed light on past winners, especially since his own Oscar victory capitalized on a figure in Gay History. Sam Smith has since tweeted his reply: 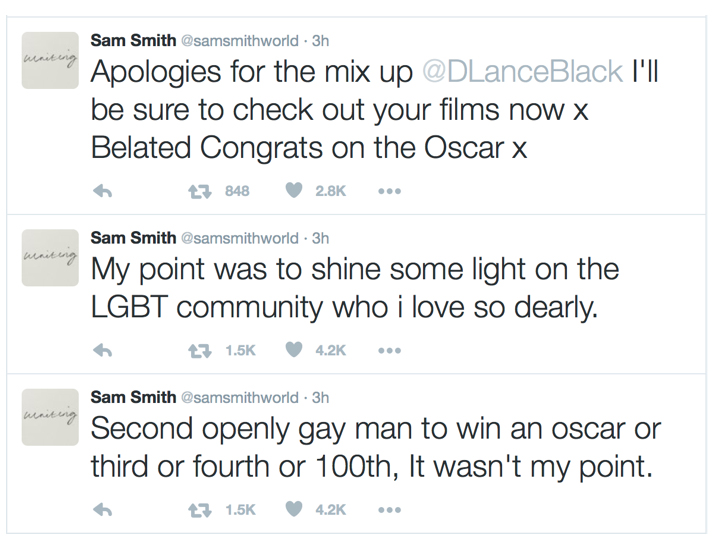