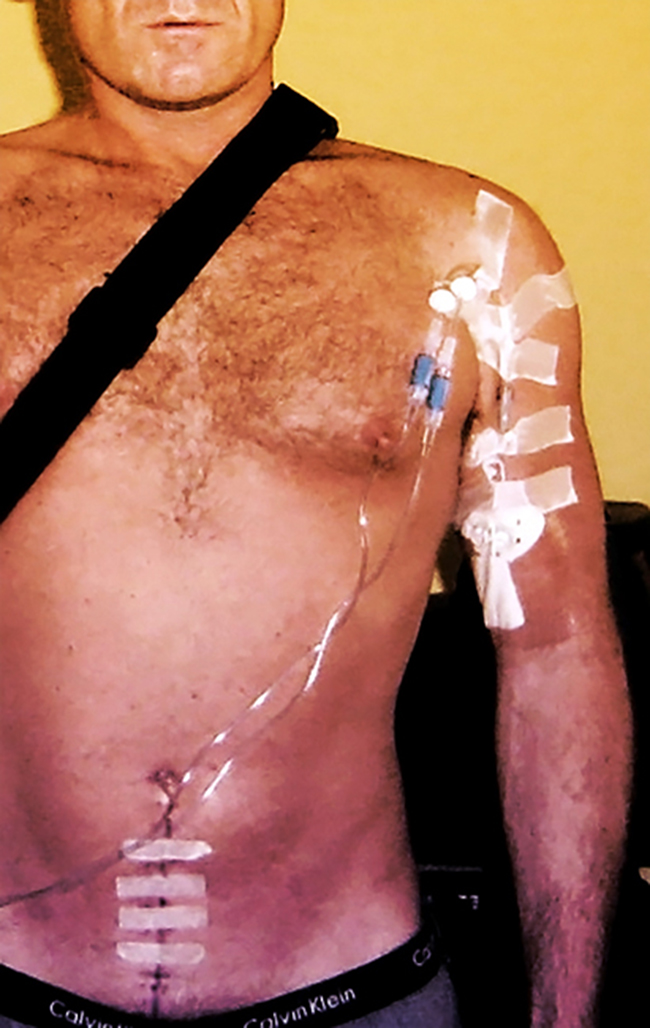 It’s the stomach scar that remains the greatest reminder of my life of addiction, the most profound physical memento of a life lived selfishly, a life not worth living at all.

Ugly inside of me
Taught me of beauty
I wouldn’t trade that work of art
for all the silk of perfect skin…
I’m a scarlover too
and I’m full of scars like you.
—Maria Mckee, “Scarlover”

I stare at it in the mirror every morning after stepping from the shower. It glares back at me: a slightly pink, quarter-inch wide vertical line starting at the bottom of my navel and disappearing into my pubic thatch, where it continues for another inch which remains invisible save for periods when I’ve been a little over-enthusiastic with my manscaping chores.

Or, more accurately, one of my scars.

I have several: each one a pockmarked or discolored reminder that I was once a daily user of crystal methamphetamine. There’s the small depression near my chin, nearly invisible now thanks to regular injections of Juvaderm to plump up the crater. It’s still obvious to me, though, and each time I drag my razor over it I am reminding of the weekend I spent holed up in my bedroom, smoking crystal and trying to ignore the gradually increasing chin-itch that seemed to come out of nowhere. Within hours it had blossomed into an inflamed lump resembling an engorged and angry zit. The next twenty-four hours were spent squeezing it, compressing it, scratching at it—trying to express the contents—to no avail.

The lower right side of my face burned and swelled so large there was no longer any definition between my jaw and my neck. I pressed bag after bag of frozen vegetables against the hot skin, seeking relief. I continued to smoke my meth pipe, though, and by the time I sought medical help and learned it was a MRSA (staph) infection, the damage had been done.

There are also several dime-shaped patches on my left thigh that resist all attempts at tanning, also the result of a staph infection I left untreated for far too long, picked up repeatedly from my drug dealer’s sheets, those times I traded sex for drugs in his filthy, worst-episode-of-hoarders-ever apartment. Repeated hospitalizations and IV Vancomycin treatments (the “antibiotic of last resort,” as my doctor called those treatments) were required to bring the MRSA super-bug into submission. Yet, each time the infection would be vanquished, while the abscess would still be drying and healing, I’d score more meth and continue my marathon of self-destruction.

Cosmetic fillers and time have faded these scars perceptibly, and though they are reminders of a past that I do not, as we say in recovery, “wish to shut the door on,” they are my lesser scars that are very rarely commented on by others and trouble me only occasionally.

It’s the stomach scar that remains the greatest reminder of my life of addiction, the most profound physical memento of a life lived selfishly, a life not worth living at all, a life that were it not for the grace of God and the love of those who were still able to love me when I most needed it, would have been extinguished long ago.

When I was still relatively new to using meth, just before entering my second stint at rehab at Glendale Adventist Alcohol and Drug Services, my appendix ruptured. Being high constantly, however, dulled any warning pain I should have felt. Instead, I entered that rehab filled with shit not only metaphorically, but literally. As the toxins from my intestines seeped into my bloodstream, I developed headaches of increasing intensity, reaching a point where any source of light would bring me to near blindness and induce excruciating, head-crushing pain. My inability to focus—my temper exacerbated by physical agony—I was eventually asked to leave due to a pain-induced verbal outburst I directed at the head of the facility.

It took several more days after leaving for the cause of my headaches to be diagnosed. I was given a spinal tap, and meningitis was discovered. The ruptured appendix, however, went undetected until the middle of my first night in Huntington Memorial Hospital in Pasadena, when I suddenly began to feel feverish. My stomach, which oddly had not given me much pain at all until this point, began to swell, harden, and turn a deep shade of blue.

Peritonitis had set in with a rapidity that terrified not only myself, but the nurses on duty as well. I was rushed into surgery with a 104 degree fever, and my family was told there was a chance I would not survive.

I did survive, obviously. I remember the surgeon standing over me in the recovery room, telling Patrick that after removing my internal organs from my abdominal cavity, it had taken six liters of fluid to clean the toxic sludge from them. I discerned a look of disgust on his face as he said this, and to this day am not sure if he was disgusted by the procedure, or by me, this filthy meth addict whose filthy insides he had just been forced to hand-wash for several hours.

I came to suspect the latter, as the wound began to heal. He had done a piss-poor job at sewing me up, cosmetically speaking. In more charitable moments I’m willing to forgive him for this, since the surgery was unplanned, and of course, because it saved my life. In less spiritually evolved moments, I hate him for his brutal handiwork: an incision that looked like it had been made with a bottle opener, and rough stitching that appeared to have been done using packing twine, creating an uneven post-healing appearance of a dress shirt with one of the lower buttons in the wrong hole.

That scar has also faded somewhat over the last ten years, of course, but it still troubles me.

Sometimes I shudder slightly with revulsion when I look at it, so grotesque does it appear to me.

When I’m inclined to explain its origin—usually when I catch someone looking at it—they invariably tell me it’s not nearly as bad as I think it is.

I rarely believe them.

I stared at it again this morning, this twelve-year old scar, reaching down and pulling the bisected sides of my lower belly taut, re-creating the flat, smooth stomach of my pre-addiction years, the sliced-in-two abdomen that no amount of dieting or sit-ups will ever be able to fully flatten and smooth again. Many times, I’ve contemplated cosmetic surgery to enhance its appearance. I have always discarded the idea, eventually.

Because underneath the revulsion, another feeling usually surfaces, pushing the revulsion aside, at least temporarily. It’s a feeling instigated by my program of recovery, a feeling I rarely had regarding much in my life, even with the multitude of blessings that have always surrounded me, even in my darkest hours: gratitude.

I’m grateful to understand that I have never been perfect, I never will be perfect, and that perfect is no longer an ideal I need to strive for.

I’m grateful to be surrounded by love and friends and family. My days are spent helping others dealing with far more pressing issues than the vanity of looking good in a swimsuit. I have God in my life, I wield love with the same passion I once wielded a glass pipe, and I am so very grateful for every bleak moment of my addiction, because having lived in darkness for so long, I am uniquely qualified to help others find their way out of it, too.

I can point to my scar, this souvenir from my trip to hell, and I can talk to others about where addiction took me. I can then speak to how recovery saved me.

At this moment, as I write this, I am grateful even for my scar.