Why is asking a trans woman abut her genitalia considered “inevitable,” while the TSA’s full-body scanners are considered a “civil liberties abuse?” Double standards, a white guy’s “junk,” and Katie Couric’s mishap. 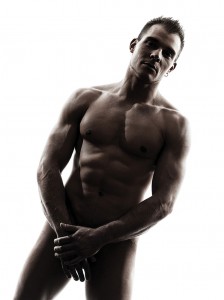 LAST MONTH, ACTRESS LAVERNE COX and model Carmen Carrera appeared on Katie Couric’s talk show to discuss their careers and their experiences as trans women. What could’ve been an otherwise respect- ful interview instead took a turn for the incredibly inappropriate as Couric openly and shamelessly asked Carrera about whether her “private parts” are “different now.” Carrera, who was just not having any of that, re- sponded perfectly: “I don’t want to talk about that, it’s really personal.”

Cox later took the opportunity to explain how focusing on “the genitalia question,” as Couric phrased it, ignores the very serious issues of homelessness, discrimination, economic injustice and violence faced by trans women. Both Carrera’s and Cox’s segments are worth watching for their fantastic responses, if you can handle the severe awkwardness of the situation. Naturally, the conservative NewsBusters.org—a Media Research Center (MRC) outlet billing itself as “exposing & combating liberal media bias”—doesn’t really see a problem with any of this.

TIM GRAHAM, THE MRC’S DIRECTOR OF MEDIA ANALYSIS, UPHOLDS THE STANDARD OF EXCELLENCE IN NEWS COVERAGE FOR WHICH CONSERVATIVE MEDIA ARE FAMOUS: VACUOUS COMMENTARY, LAZY MISGENDERING, AND LITERAL TOILET HUMOR.

It seems there’s only one thing with the power to unite the MRC and Katie Couric, whom the MRC previously bestowed with the singular honor of “Worst Reporter in the History of Man.” This is, of course, a mutual and overwhelming sense of entitlement to trans women’s bodies.

Tim Graham, the MRC’s director of media analysis, upholds the standard of excellence in news coverage for which conservative media are famous: vacuous commentary, lazy misgendering, and literal toilet humor. In his post, titled “Katie Couric Upsets the ‘Trans Women’ By Asking Those Uncomfortable Wiener Questions” (why the scare quotes? Is he calling us cis?), Graham spends a few short paragraphs putting in the least effort possible even for a transphobe.

Meandering from calling Carrera and Cox “men” who “dress like women” (clearly Couric was actually inquiring about the surgery they’ve had done on their wardrobes), to suggesting questions about genitals (or “the bulge issue,” as he so cis-ly put it) were “inevitable,” to pondering whether it’s “possible to pretend to be a woman and use a urinal,” he ultimately projects an air of befuddlement that only comes from people who’ve never had to think about this in their lives: how could you possibly see anything wrong with asking trans women which genitals they have on national television?

Indeed, what’s the big deal? It’s just genitals, right? No need to get uncomfortable over a few wiener questions. Yet Graham would do well to ask his colleagues at NewsBusters the same thing.

Since 2010, his fellow writers have published numerous articles expressing their outrage at the Transportation Security Administration’s updated screening procedures—namely, the full-body scanners that reveal the shape of passengers’ bodies, and the “extended pat-downs” which can include contact with the breasts, buttocks and genitals.

In an article from just last month Graham himself described the TSA as “well-known for being too aggressive in its body searches.” So, let’s put it all together: When some bored TSA agent in another room merely looks at the shadow of an angry cis white guy’s “junk,” or checks whether that’s a firecracker in his pants or he’s just happy to see them—for the purpose of potentially preventing hundreds or thousands of deaths—it’s “invasive.” It’s “overboard.” It’s a “civil liberties abuse.” It’s “too aggressive.”

When trans women of color are asked point-blank about their genitals in front of a daytime audi- ence of millions, for no reason other than prurient and entitled curiosity, it’s “inevitable.” Inevitable. Inevitable that trans women’s bodies will be treated as public property and denied even basic human dignity. Inevitable that they’ll be gleefully dissected in detail for the enjoyment of cis people—or, as Laverne Cox pointed out, simply murdered in the streets if that’s what cis people want.

As long as no one touches Tim Graham’s junk.

But those “uncomfortable wiener questions” are still on the table, right? That’s totally an appropriate topic for everyday conversation. Has anyone gotten around to ask- ing Tim Graham if he has a penis? Or is that “bulge” just a packer?

Are those his original genitals or did he have them reconstructed? Does he have to sit down to pee, or can he use urinals like a real woman? Is he a grower or a shower? How big does it get? How does he have sex—like, how does that work? Does he have to take medication or does he have one of those erectile implants?

Most crucially: Can we all make sure that he’s forced to answer these very important questions every single time he decides to share his valuable opinions and experiences as a straight cis man?