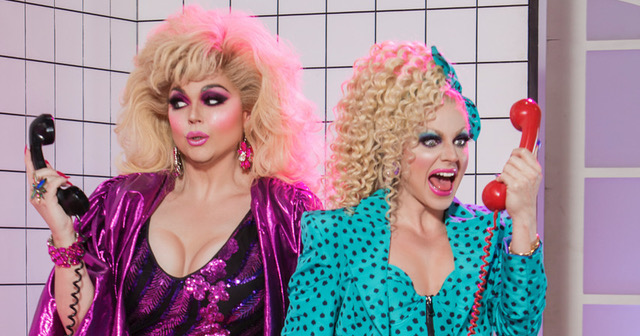 In their new podcast, Brenda, Call Me!, best friends, drag superstars and sisters in crime, Courtney Act and Vanity chat about all things drag.  From the political to the downright silly, no topic is off limits. They’ll even call up a celebrity friend along the way to help them nut it out.

The show is high energy camp, featuring plenty of sass, with each wildly entertaining episode transporting listeners into the conversation, no matter where they are in the world.

“”‘Brenda, call me’ is the text Vanity and I send to each other when we want to chat,” explains Courtney Act.   “We have been friends for twenty years, lived all around the world, in different time zones, and we are super excited for listeners to join in on our best friend conversations.  We’re just glad the shows are not live and that the legal department will be reviewing them before they hit listener’s ear drums.”

“We thought we were going to be recording this podcast on opposite sides of the world,” says Vanity.  “However, Ms. Rona has reunited us and we’re super excited to be sitting face-to-face giving our unsolicited drag opinions on all sorts of topics. Courtney doesn’t actually know why we call each other “Brenda” so make sure you tune in when I explain its origins.”

Artist, advocate and performer, Courtney Act aka Shane Jenek burst onto screens in 2003 when she made it to the semi-finals of the premiere season of Australian Idol. Since then she has continued her global rise appearing on RuPaul’s Drag Race, Celebrity Big Brother UK and Dancing With The Stars as well as hosting the UK’s first bisexual dating show E!’s The Bi Life. In 2014 she released her debut EP Kaleidoscope; with her online videos having been viewed over 40 million times.

Vanity aka Benjamin Moir has become legendary within the drag scene, both in business and on stage. Vanity  started the hugely successful wig company Wigs by Vanity with Courtney Act and their wigs are donned by queens around the globe including RuPaul and Conchita Wurst.

Courtney and Vanity met at the infamous Sydney drag nightclub, Stonewall, and Vanity took the 18-year-old under her wing.   “I didn’t have the heart to tell her to f* off.  I was like ‘come on, let me show you the way child.'”  So was the beginning of a beautiful friendship that is now a podcast show.

Brenda, Call Me!  is available on the Nova Podcast Network, with new episodes launching every Thursday. Episodes are available at https://omny.fm/shows/brenda-call-me/ or wherever you get your podcasts.