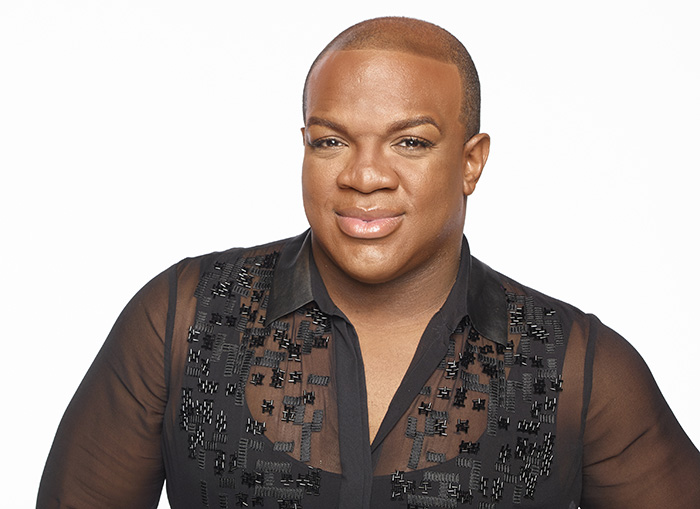 Derek J is fierce, hunny. Not just because the award-winning celebrity hairstylist, television star and entrepreneur wears flashy, flamboyant styles with stilettos, or has a face beat to the gods. But now, the Toledo, Ohio-native, is ferociously taking on the biggest role of his career: filmmaking.

The reality star—best known on Bravo TV’s hit shows The Real House Wives of Atlanta and Fashion Queens—has released a new documentary about black gay men. The film, “Gay Like Me,” tells the story of five openly-gay men who look straight or fit into society’s skewed definition of “masculinity.”

Derek J, 36, explores this hunky male image of gayness rarely shown in mainstream media which contrasts his own.

Derek J is a costume. He’s a character. Do I enjoy wearing heels and flowy tops on my day-to-day? Probably. But would I rather be in sneakers and a jogging suit? Most of the time—yes. We all have a gimmick to take us to the next level. The heels are mine.”

He sat down with THE FIGHT to talk about the new film, the status of “Fashion Queens” and a surprise revelation: he’s never had sex.

Why did you want to produce a film focusing only on “masculine” men?

I have masculine friends that say they never see themselves on TV. So I said hey if you have a problem with it, let’s do something about it.

For this to be my first project, I really wanted to make an impact. I made sure that the men were good looking and well-spoken. I wanted a woman or a gay man to look at them and say this is someone I would date. Or for a straight man to say this could be my homeboy.

I went back to my high school in Ohio and I noticed there were a lot of feminine gay black men. What I realized is they are acting out what they visually see of gay men on television. And then there are men who know they like men, but don’t want to be like what they see on TV. I wanted the film’s message to say “hey there are other types of gay men out here.” The film is a learning tool for everyone.

Some people would say you perpetuate and exploit the stereotype of a black gay man in mainstream media.

In the opening monologue of “Gay Like Me,” I say I am guilty of it. In entertainment, being gay on television is still new. Think about when black people were initially on television. They were maids, prostitutes, crackheads, drug dealers. There were no roles that were befitting and high ranking for black people. Gay people on television are going through that stage in television.

Black women are not mentally evolved enough to see a gay black man that she can be physically attracted to. There’s no way she can see a Boris Kodjoe type character on TV and think he’s a gay man. They just wouldn’t watch it. All hell would break loose. The only person sliding through is Karamo Brown but the industry makes it very clear he’s a gay man.

Derek J is a costume. He’s a character. Do I enjoy wearing heels and flowy tops on my day-to-day? Probably. But would I rather be in sneakers and a jogging suit? Most of the time—yes. We all have a gimmick to take us to the next level. The heels are mine.

Have you received criticism for focusing on the stories of just “masculine” men?

Not yet [laughs]. But I really think the content of the stories are so well-rounded people will look past that. Regardless of the look of it you could see yourself in one of these stories.

Which story in “Gay Like Me” do you identify with?

The stories of these men helped me understand them, but my story is different. I am considered a feminine gay man. I’ve never been gay bashed. I’ve never been beat up. I don’t have issues with straight men. My mom knew that I was gay. We just didn’t talk about it. It was just like “Ok, child. We know.” I always had support from my mom and dad. I never had that trauma growing up gay.

As a child, I prayed “since I like boys and I know girls like boys, Lord just let me be a girl.” I never wanted to stop liking boys [laughs].

I’ve always been very vocal about my journey. I’m 36-years-old. I’ve never had sex. When you start having that conversation with people, you learn that there are a lot of other grown-ass men that haven’t had sex either. And since we make sex such a big deal, these men never talk about it.

Or there are men that have had sex once before and they didn’t like it, but they know they are still attracted to men. It’s about having those conversations. I just want to be able to vocalize that “hey you are not alone.”

You have never had sex? Why?

My mother was a big police officer back home in Ohio, so she always instilled in us that what you do is a reflection of me. So when I was home, I was not going to get into any of this stuff. I don’t need anything coming back to this lady.

In the Midwest, you’re only gay at night. When I moved to Atlanta, I was like what the hell is going on here? And then I got on television. That was a whole situation I was trying to figure the fuck out. So now that I’m 36. I’m too old to be a ho. You really can’t yearn for something you’ve never had. Intimacy is a great and you can be intimate with someone without having sex. You have to be very cautious now. I’m coming in an age where people are not caring about themselves so why would they care about you? Now that I’m a personality it makes it harder.

Getting back to “Gay Like Me.” The documentary has been shown at conventions and special events in Atlanta, Cleveland and New Orleans. What has been the overall reaction from people who have viewed the film

During the talkbacks, people are able to talk about what they just saw. They like that it’s very transparent. It’s fluid.

Through making the film, Derek J says he’s learned masculinity is subjective and open to interpretation and discussion.

For dates on where you can attend a screening of “Gay Like Me” go to gaylikemeproject.com. Derek J plans to add a sequel to the film that explores how parents cope and react to learning their child is gay.

In the meantime, however, he is still making waves in the hair care industry and television. He will have regular appearances on the 10th season of “RHOA,” including appearances in an upcoming streaming series, yet to be announced. He is also writing a scripted piece about a character who is criticized for being a fat, feminine gay.

As for the future of Bravo’s “Fashion Queens,” Derek J says the series is not returning. “They basically told us that our show has ran its course. They didn’t expect us to do well but we did. You think you would get rewarded but you get punished. I like that we changed the look of who could talk about fashion. We gave people hope.”