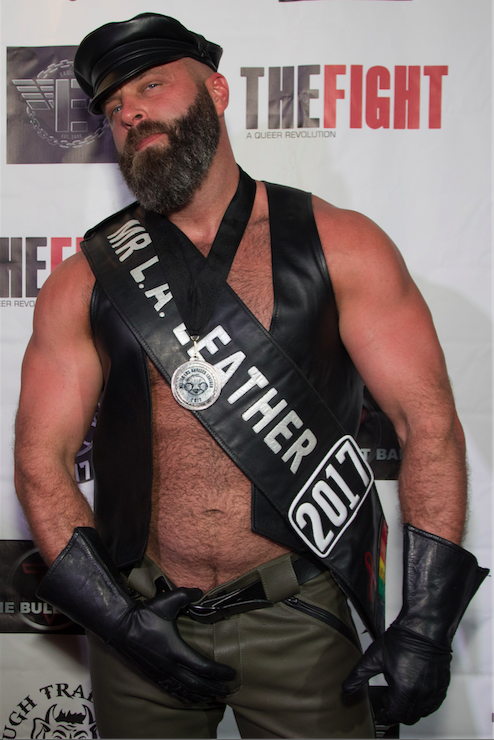 Originally from a small farm town outside of Sacramento, Wilcox moved to Los Angeles in 2003 to finish school at Pepperdine University, in Malibu. Since 2005, he has been working in IT security and compliance, most notably as Director of IT Compliance for Paramount Pictures and Viacom Inc. He is currently a consultant for entertainment and media companies implementing cybersecurity and IT risk management programs.

A proud self-proclaimed nerd, Wilcox enjoys anything that deals with sci-fi, fantasy, anime, and/or comic books/Manga. “I’m basically a pretty shy person,” reveals Wilcox in an exclusive first interview with THE FIGHT, after winning his title. “Entering this contest was a way for me to get out of my shell.”

“One of the issues I would like to tackle as Mr. Los Angeles Leather is to broaden the leather / kink / fetish community,” states Wilcox. “For many years I felt like an outsider as a gay man… I just couldn’t seem to find my place. However, over the past few years, being a part of this community has truly made me feel that I have a family of brothers and sisters. I want to reach out to those who may feel intimidated by the leather community and welcome them. This community is truly welcoming toanyone who feels like an outsider. I want to make sure that folks know that—so that they can celebrate who they are, their fetishes, their kinks, their passion.”

Another topic Wilcox is passionate about is rescue shelters. “My dog, Chunks, is a rescue and I feel like he saved my life… when my father passed away a few years ago Chunks helped my overcome my depression.”

“I want to organize fundraisers for rescue shelters. I’m thinking this could be in conjunction with Pups LA—that would be a perfect match!”

For more info on Jeff Wilcox and LA Leather Pride – go to losangelesleatherpride.com.