THE WOLFF PACK | The Fight Magazine 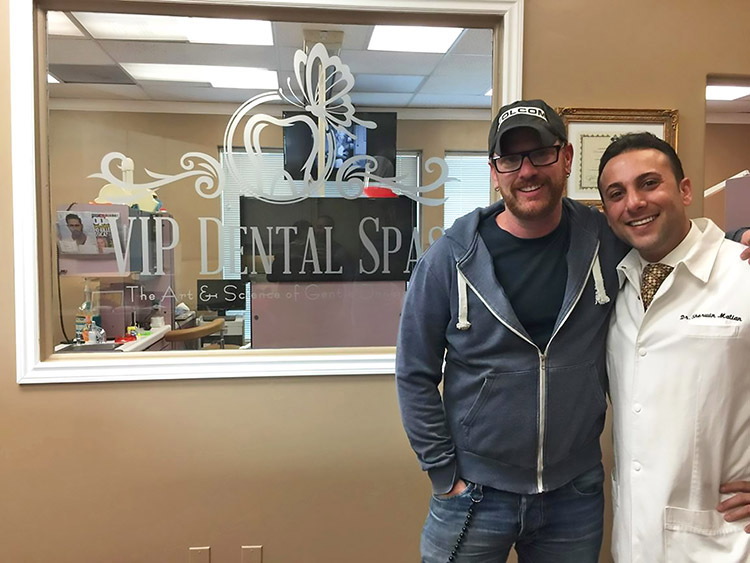 VIP Dental Spas in West Hollywood joins forces with THE FIGHT to help one gay man regain his confidence.

Four years into his recovery from crystal meth addiction, Wolffgang Scott’s life has done a complete turnaround. There is plenty for him to be happy about. And yet, until recently, “Wolff” rarely smiled.

Make no mistake—Wolff is fervently committed to his recovery and to helping others achieve the same. But no amount of dedication to sobriety can correct some things. In Wolff’s case, this included the serious dental damage caused by the drug.

Last September, THE FIGHT focused much of its reporting on recovery in the LGBT community. Not long after, the magazine learned of reader Wolff’s situation, channeling the spirit of the fast-approaching holiday season, they were inspired to give back to the community by bringing together a group of individuals dedicated to helping Wolff regain his smile.

Dubbed the “Wolff Pack,” the team’s first step was to find a local dentist practice willing to perform reconstruction. As most people dealing with dental issues know, cost can be highly prohibitive, even with dental insurance. In Wolff’s case, the $1,700 he’d raised from friends and loved ones on GoFundMe.com wasn’t nearly enough to cover the intensive work required. “I would see one dentist and they would tell me the cost would be around $30,000, and then I’d see another and I’d be told $80,000. The money I was able to raise was the least of what came about because of the Go Fund Me campaign. I also got a lot more help in the way of advice, recommendations and leads. The crazy thing is that I knew the answer had to be out there somewhere, but I had to just be humble enough to admit how bad the problem was and ask for help. It was the only way I was going to find the help I needed.”

Wolff’s willingness to go public resulted in THE FIGHT arranging a meeting with VIP Dental Spas in West Hollywood. VIP’s Dr. Sherwin Matian and Dr. Arash Hakhamian are two of Southern California’s top dentists, having graduated at the top of their classes from UCLA and USC, respectively. Since then they have made it their mission to bring the best of modern dentistry to West Hollywood. They are respected nationally as instructors in the use of stem cell therapy to restore lost and missing teeth. They routinely perform advanced surgical procedures, full mouth reconstruction, dental implants and much more, all in the relaxed, pampering atmosphere of their Santa Monica Blvd offices above the Coffee Bean and Tea Leaf.

But it’s not only their expertise that distinguishes Dr. Sherwin and Dr. Arash.  Born into families with deep roots in medicine, both doctors learned early on the importance of serving others, as well as the joys of relieving pain and suffering. That’s why it is their office policy for all employees to volunteer at least two weeks each year to an organization of their choice. In the last two years, they have offered their talents with various charities in New Mexico, Guatemala, Belize, Honduras, Vietnam and Jordan, among others. Locally, their team was selected to provide pro bono care to the 2015 World Special Olympics, held in Los Angeles.

In addition to these missions, they also regularly choose one deserving person within their community, someone facing both financial trouble and extreme dental needs. Their goal: To help raise this lucky patient out of pain and disfigurement, restoring their ability not only to chew and speak, but also to smile. This year, the lucky patient was Wolff.

Before VIP Dental Spas was first mentioned to Wolff, he “had no idea that there were benevolent forces working behind the scenes to make this happen.” After several consultation visits, the work on Wolff’s smile began. As of press time, there is still work to be done. Yet after VIP’s outstanding reconstructive work on his upper teeth, Wolff is well on his way to permanently regaining his smile. “Beyond the generosity they showed me, Dr. Matian and Dr. Arash were amazing, and really knew what they were talking about. Before the reconstruction began, I had learned to live with the situation as it was, and even developed a sort of self-confidence in spite of what was going on with my mouth. I can’t even put into words how it feels today to not have to overcompensate, hide, or cover up to feel confident. And this confidence is the result of only the first stage of the work.” (If you’d like to help Wolff reach the finish line with his dental restoration, please visit GoFundMe.com/RadicalResto.)

VIP Dental Spas, THE FIGHT, and the rest of the Wolff Pack are grateful for the opportunity to give back to the LGBT community. Wolff, of course, also feels enormous gratitude, and much more. “Grateful doesn’t even begin to describe it. I don’t know how I would have ever been able to pay the bills for such extensive procedures. So I guess I’ll just have to take a page from VIP’s playbook and pay it forward when I can.”

He says this, of course, with a smile.