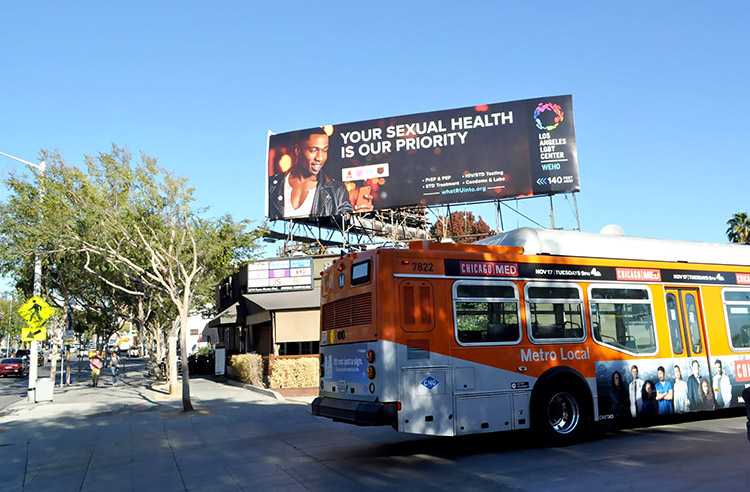 Battle of the billboards in Los Angeles. The Center versus AHF.

The Los Angeles LGBT Center recently launched a campaign dubbed “What R U Into?” showing men at different WeHo hot spots conveying “what they’re into” by using various emojis on smart phone apps. Scrawled under the images, the message from the Center is “Whatever you’re into, caring for your sexual health is our priority at the new Los Angeles LGBT Center-WeHo.”

Jim Key, LA LGBT Center: “…Smart phone apps are how people are meeting and communicating today–whether you like that or not… we wanted our campaign to acknowledge that, without stigmatizing people for it. The last thing any of us need is more stigma regarding who we are or how we have sex.” 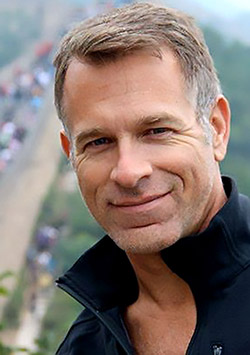 Under the AHF billboards, the type reads: “Tindr, chlamydia, Grindr, gonorrhea” and “Do you trust him?”

In an interview with THE FIGHT Jim Key, Chief Marketing Officer at the Los Angeles LGBT Center — explained the Center’s “sex positive” outreach.

“In order to get the best medical care and health advice, people need to feel completely comfortable with their healthcare providers. They need to feel free to discuss any aspect of their life that could impact their health, including sexual practices, without fear of judgement. Unfortunately, there are still too many people who don’t even feel comfortable acknowledging their sexual orientation or gender identity to their doctor, so our community isn’t getting the type of care we need and deserve.”

“We decided,” reveals Key, that “it was important for our campaign to reflect the fact that the Center is a place where everyone feels welcome–whatever their sexual orientation or gender identity–and whatever they’re into. And because smart phone apps are how people are meeting and communicating today–whether you like that or not–we wanted our campaign to acknowledge that, without stigmatizing people for it. The last thing any of us need is more stigma regarding who we are or how we have sex.”

“The reaction to the campaign has been great and more importantly, tremendous numbers of people have been coming to the Center-WeHo and we’ve helped hundreds of people get on PrEP,” states Key.

When asked if the Center’s «sex positive» marketing was driven by the fact that many community activists were angered by AHF’s “scare tactics” marketing approach—Key says the concern was first and foremost getting treatment to those in need.

“We examined marketing campaigns developed by LGBT and HIV/AIDS organizations all over the country, going back for many years, and a number of them influenced us one way or another.  But ultimately we decided on this campaign and approach–after consultation with many of our sexual health experts and outreach staff–simply because we believed it was the right one to encourage gay and bisexual men to get the care and treatment they deserve and to be aware that we offer that care at the Center-WeHo and our other facilities.”