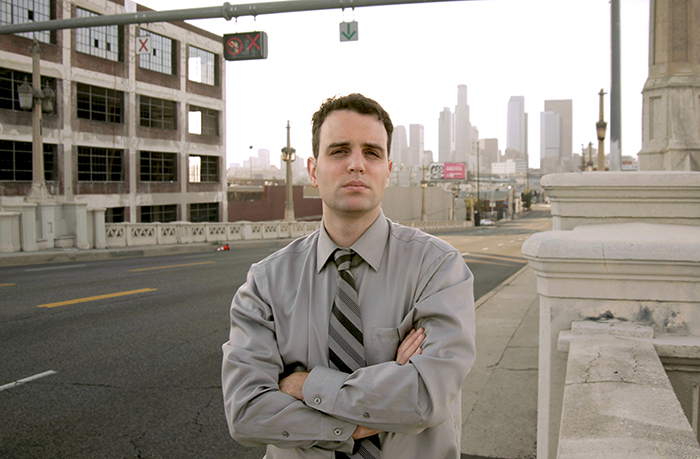 Author Jason Louv on discovering your own unique reason for existing in the world and your reason for being born in this place and time.

As a journalist, he has covered surveillance, international trade and the dark side of technology for VICE News, Boing Boing, Motherboard and many other media outlets.

As a futurist and strategist, Louv has worked on Buzz Aldrin’s international campaign to colonize Mars, Google’s artificial intelligence program and in many more strange and wonderful places.

Counterculture publishing legend R. U. Sirius calls him “One of humanity’s best mutant scouts on the frontiers of human experience.”

In an interview with THE FIGHT Louv talks about celebrating queerness and “the path of fully becoming yourself, beyond and even in opposition to the intolerance and close-mindedness of society.”

For those who are unfamiliar—what is magick—as opposed to magic.

Real magick (as opposed to stage magic) is a set of tools for radically changing your own consciousness. I use it as a catch-all term that encompasses the entire spectrum of the world’s sacred practices, including ritual, meditation, yoga, divination, mindfulness, and lots more. Importantly, it is the uniting of these practices into accomplishing one single and overwhelming goal: Discovering, and achieving, your True Will—your own unique reason for existing in the world, your reason for being born in this place and time.

Magick allows queer people (and all people) to completely reclaim their spirituality on their own terms, rather than following the dictates of a church or religion that is fundamentally hostile to their very existence.”

By contrast, religion (and pop New Age spirituality, which is kind of its own religion at this point) tends to give people one-size-fits-all statements about how everybody should supposedly live. Magick is very, very different. It’s the DIY approach. It’s a set of tools and practices to use in an experimental, individual way. Anybody who tries these experiments will likely have vastly mind-expanding and consciousness-shifting things occur to them. But there’s no dogma attached. You have the direct experience of the sacred and numinous yourself, and then you get to decide what it all means. I just provide the toolkit.

How did you get involved in this field?

I became fascinated with magick and the occult in the usual way; I was an alienated, sensitive and creative teenager who wanted more from life than what I was being told was possible. I was looking for a vehicle to get me out of Dodge. Some kids start bands, but I found magick, beginning with the book The Occult, which I discovered in my local library, read cover to cover and then returned, at which point it vanished from the shelves, never to be seen again.

This was a great, scholarly, wooly-turtleneck 1970s examination of magick by the great English existentialist writer Colin Wilson, who had been lauded in the 1950s as England’s homegrown answer to, Jean-Paul Sartre. As time went on, however, Wilson began to move from existentialism into mysticism, which lost him the accolades of the English literary establishment, and by the opiated incense cloud of 1969 rolled around he was asking questions like Is there some kind of hidden psychic faculty in individuals that can be systematically trained and awakened, making them fully alive and even more-than-human?

You can imagine that this was a rather appealing idea to a sixteen-year-old, and it still is to me now. That was the beginning of my serious foray into the occult, and it wasn’t long before I started attempting my own rituals, both from books and my own self-created ones—and getting results. Then it was off to the races. Twenty years later, I’ve been doing nothing but traveling around the world to learn more, from every spiritual tradition I could find, and writing down and teaching what I’ve discovered along the way.

In a recent interview you said that “In my life, I’ve noticed that queer or queer-identifying people seem to be more in tune with the spiritual side of things.” Can you elaborate on that? Why do you think that is the case?

It’s just been my observed experience. There is absolutely, for some reason, something otherworldly or “fae-like” about many queer people, in that they are slightly at an angle to mainstream straight society, and freed from it in some ways. Many of my teachers were or are gay, queer or trans; my primary mentor, starting from my early twenties onward, was Genesis P-Orridge, who was at the time initiating the Pandrogyny project to break down gender categories and sexuality completely. Gen’s teachers were William S. Burroughs and Brion Gysin, both queer artists and Magi who saw homosexuality as a chance to split from and escape the control structure of society, which is largely made up of reproductive forces. Gysin specifically saw homosexuality as a “cut-up,” a way to short-circuit the reproductive imperative that completely defines the lives of most people in an unconscious way.

I also think that, practically speaking, magick is not judgmental. I’ve met so many people, particularly here in the US, who grew up in repressive and intolerant religious climates, where they were told that they weren’t okay in so many overt or covert ways, and have ended up with all kinds of trauma as a result.

Magick allows queer people (and all people) to completely reclaim their spirituality on their own terms, rather than following the dictates of a church or religion that is fundamentally hostile to their very existence, no matter how tolerant it claims to be for the PR. By contrast, Magick celebrates difference, it celebrates queerness—it sees it as an advantage, in many senses. it encourages and empowers people to become radically, mold-breakingly unique. It is the path of fully becoming yourself, beyond and even in opposition to the intolerance and close-mindedness of society. And we need it more than ever, because (obviously) our world seems to be getting more small-minded and medieval with every passing day.

John Dee and the Empire of Angels is my magnum opus. It’s a biography of John Dee, one of the most critical and central figures in the history of magick, as well as his psychic assistant Edward Kelly and their mind-bending sessions summoning and conversing with angels. These are the sessions from which the core of modern magick originated—and the core of modern history itself. Along the way, I cover over 500 years of the secret occult history of the world. We explore the birth of Qabalistic magick in the Medici city states 500 years ago, the 20th century ritual experiments of Aleister Crowley and Jack Parsons, how magick has shaped our present world, and what the Apocalypse truly is. This is the definitive book on the occult—the best possible book I could write, uncovering layers upon layers of reality, revealing the shocking plans of the Enochian angels, and showing you the big picture of what Western magick actually is. It, frankly, explains everything!

What do students learn at your online school for magick and witchcraft—Magick.me?

At Magick.Me, I present a gigantic and comprehensive range of techniques drawn from the Western occult tradition—chaos magick, Hermeticism, Tarot and I Ching, meditation, yoga, astral projection, using occult techniques for artistic inspiration, finding your True Will, and lots, lots more. I’ve completely removed, as much as possible, the superstition, New Age woo, and Goth silliness it has previously been associated with. It’s organized into bite-sized 5-minute units so that you can learn step by step on even the busiest schedule (or binge it if you want to really go for it). There’s no dogma you have to believe or group you have to join—it’s all there on the site. It’s just the pure techniques—practically, clearly, and safely taught, and structured into concise units, so that you can learn and apply the material as you see fit.

My goal is to make Magick accessible to all. Have at it!

You can follow Jason Louv at his podcast, Ultraculture With Jason Louv, which you can find on iTunes, Stitcher, Spotify or anywhere else. You can find this and all of his other projects at jasonlouv.com.  His Twitter is @jasonlouv, and the school is Magick.Me.