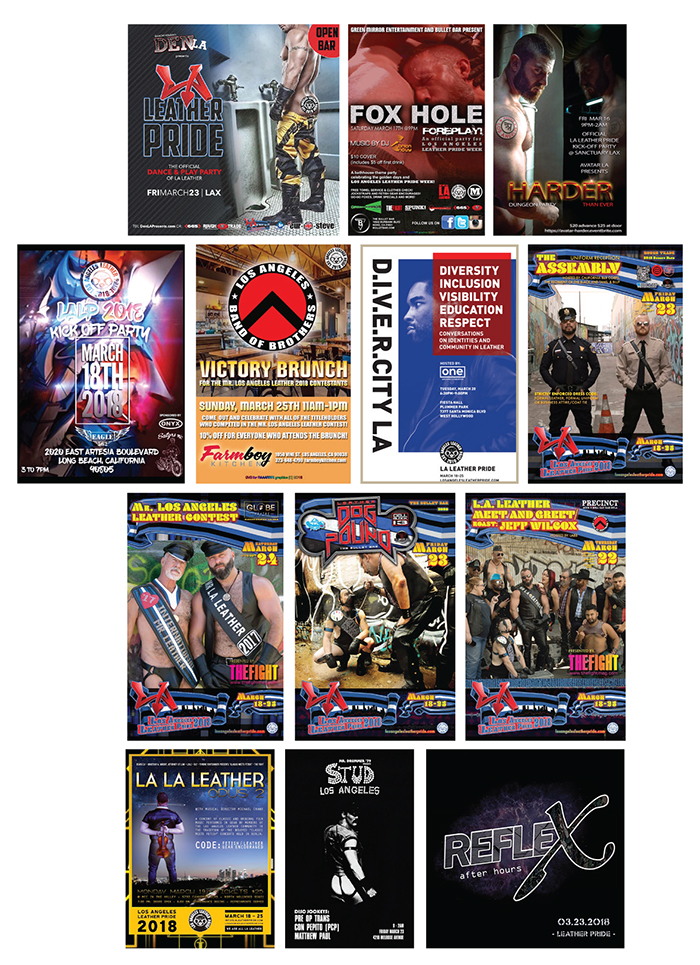 For more details on these events and last minute updates please visit losangelesleatherpride.com.

MCC in the Valley, 5730 Cahuenga Blvd, North Hollywood, 7pm-10pm. The Classic Meets Fetish tradition of Folsom Berlin, with an emphasis on classic and original music that has been used in film, television or other media.

D.I.V.E.R.CITY LA:  CONVERSATIONS ON IDENTITIES AND COMMUNITY IN LEATHER

Precinct, 357 S Broadway, Los Angeles, 7pm-11pm. Come out to mingle with the 11 gentlemen who will be onstage for Mr. Los Angeles Leather 2018.  Send off LA’s favorite leather muscle man in style—and get all the dirt on his year as Mr. LA Leather 2017.

Faultline Bar, 4216 Melrose Ave, Los Angeles, 9pm-2am. Mr. Drummer ‘79 presents: A tribute to one of LA’s longest running leather bars. From 1974-1988 the Stud inhabited what is now the Faultline. For one night only we are bringing back the old school cruise bar. Leather dress code encouraged.

Bullet Bar, 10522 Burbank Blvd, North Hollywood, 9pm-2am. Four years ago, we decided that some pups needed a place to go on LA Leather Weekend, and so Leather Dog Pound is back this year again as a part of the celebration!

Globe Theatre, 740 S Broadway, Los Angeles, 6pm-10pm. We are ALL LA Leather! Come out and celebrate being a part of this beautifully imperfect tribe. Cheer on the LA Leather Titleholder Class of 2018 as they expose themselves (figuratively and actually) on stage for you.