It’s a Bird…It’s a Plane…It’s A Giant Penis! | The Fight Magazine 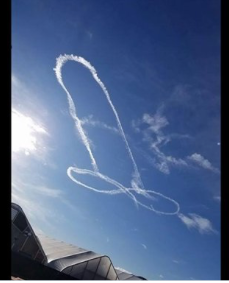 Navy officials have confirmed that a giant penis that appeared in the sky over Okanogan County in Washington state on Thursday was indeed drawn by its pilots, reports Buzzfeed.

Many local residents spotted the phallic skywriting, and some posted pictures of it on social media.

“The Navy apologizes for this irresponsible and immature act,” Lt. Cmdr. Leslie Hubbell told BuzzFeed News. Hubbell also confirmed the crew had been grounded for the stunt.