Got MILK? | The Fight Magazine 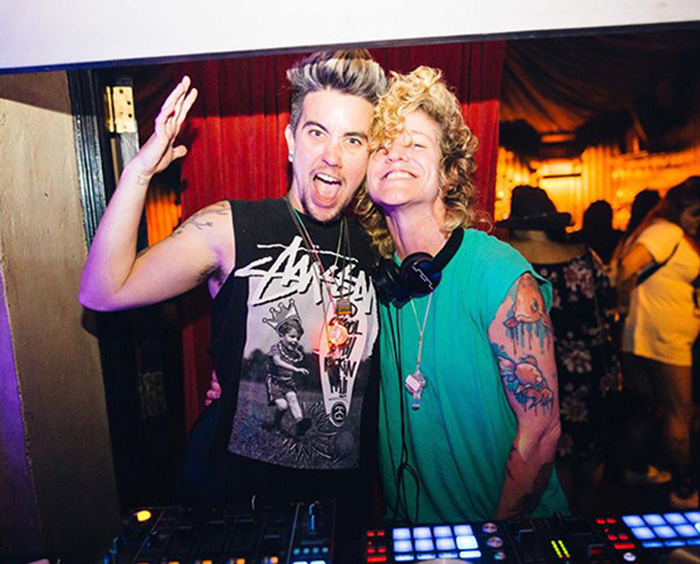 An interview with  Morgan “Goodboy” and  Steph “Bounce” of Milk Milk, a once a month, pop up, queer/lesbian dance party that takes place at locations throughout Los Angeles.

How long have you been a part of the LA queer party scene?

Goodboy: I’m a true Angeleno and was an early gay bloomer, always searching for girls. It was hard to find lesbians at an early age in LA and even all the way through art college so I started creating my own outlets. I created a lesbian vlog called “So Gay” that got picked up by Dinah Shore Weekend which sent me on a bullet train into the national lesbian community. Since then I’ve co-created Milk Milk (Lemonade), Glow B.O.Y., Box Office, “GoodBoy Presents” events, and have worked with several LGBTQ groups including the 90s Grind, Munch Brunch, Queertainment, Back Lot Bash in Chicago, and have performed as a DJ at Prides all over the the US, and am currently a Dinah resident DJ.

Bounce: My role at Milk Milk is creative engineer/co-owner. I have been a part of the LA queer party scene for over 10 years, the first 5 were just as a party goer, and then I became more involved with dj-ing and throwing events

How would you define Milk Milk?

Goodboy: A good vibes lesbian/queer dance party that welcomes all who want to shake, rattle, and roll with good people. We incorporate different themes, props, local artists, vendors, and fresh talent together in non-gay recognized locations so you never get the same experience. We play deep, funky, electro house with heavy bass. We take the music component seriously and never play top 40s but also try not to take anything too seriously… We offer a safe place of peace and fun and you won’t ever feel like you are in a meat market.

What do you think makes queer parties like Milk Milk so important in today’s political climate?

Goodboy: We need each other not only for support but for the safe space, and it doesn’t hurt to let loose in these extremely controversial and scary times. I feel this is our role.

As a young, queer person do you remember the first queer bar/party you went to? How did it affect you?

Goodboy: I truly lived for Tiger Heat and Rage, the only 18 and over clubs in LA—however I left my heart in a dive bar attached to a motel in Florida called Parliament. It was there that I saw my first drag king show where drag kings stripped down to femmes. I was a 21 year old puddle on the floor and I still tell the story. I want to rebuild this here in LA.

Bounce: I was 17 with a fake ID living in the Inland Empire. My first gay bar was Oasis, I had long hair and a sideways baseball cap. I saw drag queens, and butch lesbians, and lil gay dudes with their “fag hags”—it gave me life. Seeing the diversity in one community, and the love that saw through those color lines. It changed me forever.

Do you think that it’s important for there to be specifically femme queer centric/lesbian parties in addition to more traditionally male leaning gay bars?

Goodboy: These are two completely different outlets but both are oh so much fun and offer a different experience. I’ve really come to understand that generally women want to be with women, and then more women. This also includes our trans allies. I love my gay men because gay men when will literally not stop dancing anywhere, anytime. It’s really what you’re in the mood for.

Information about their next party can be found at www.milkmilklemonadela.com/
or at their Facebook page at www.facebook.com/MilkMilkGoodVibes/