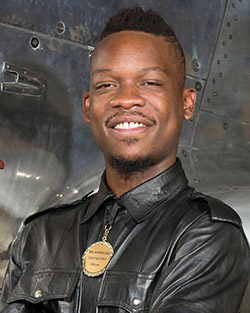 Sir Eric D’Andre was born and raised in the south side of Chicago, IL as one of 19 children. He worked his way through MIT and received a Master’s Degree in Robotic Engineering which he worked in for 6 years with IBM. He performed volunteer work for several agencies including Department of Children and Family Services TPAN and social services assistance for ADAP applicants. He visited Palm Springs on a regular basis before moving here and performed volunteer work on several occasions for the Desert AIDS Project.

As a young leatherman his main goals are to mentor young ethnic gay men on the practices of safer sex both with and without condoms and to bring diversity and merge old school traditions with new ideas in the leather community. He has a love of animals, plants and flowers and hopes to assist in fund raising activities to help animals. 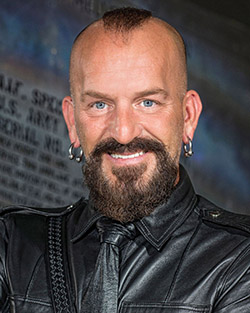 Steven’s journey began almost 20 years ago in a city known for its leather lifestyle, San Francisco.  Embracing the brotherhood, he was quick to become a leader in the community through his visibility and fundraising.  He has received honors and proclamations from a State Senator and the Lieutenant Governor.

He moved to the desert six years ago after many years of visiting and helping in local fundraising events.   He continues his quest to be a leader in the leather community with his commitment to serving others.

Competing for Mr. Palm Springs Leather 2017 is his next step in this journey. 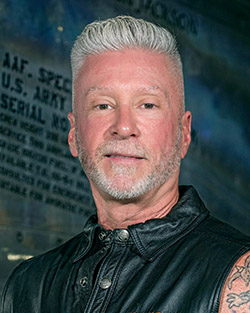 Jimmy is a massage therapist and has lived in the Desert for eight years. He enjoys the beaches, mountains, and all of Southern California. He also likes to golf, ride his Harley, and travel. He is proud to represent Off Ramp Leathers in the Mr. Palm Springs Leather 2017 contest.

Trent is a retired Navy Petty Officer where he served under the United States Forces Command, the Central Forces Command and the United States Pacific Fleet. He is a Public Health Nurse with retirement from the City and County of SanFrancisco where he worked at San Francisco General Hospital in the AIDS Ward, The Gay and Lesbian Focus Unit, Psychiatric Emergency Services and the African American Focus Unit. He has worked for a Coachella Valley Medical group where in Social Services he helped develop a Mental Health and Substance Abuse Program, again for the public developing a Psychiatric Forensic Focus and currently is in the Emergency Department at a local area hospital as a Psychiatric Nurse.

He first became familiar to the leather community when, shortly after being widowed, he had been invited to the memorial service of a long time family friend, John Embry. Mr. Embry started Drummer Magazine, and requested those attending his memorial service do so in full leather. It was then that he began to see a place where he could thrive and heal from the wounds of the past.

He is committed to a compassionate world where everyone matters and where diverse communities flourish.