From BERLIN With LOVE | The Fight Magazine 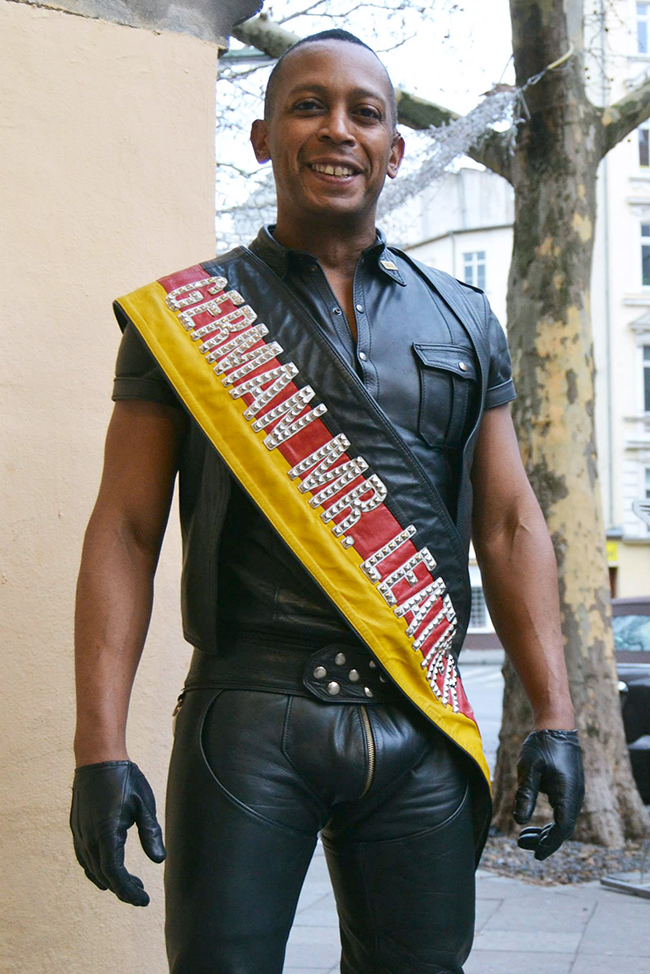 German Mr. Leather Tyrone Rontganger, a judge at next month’s Mr. LA Leather contest, on his love for Los Angeles, racism within the community and setting an example.

Tyrone Rontganger, German Mr. Leather 2014, will be in Los Angeles next month as one of the judges at the Mr. LA Leather contest.

Born in London—Rontganger has lived in Germany for the past 25 years. However he is no stranger to Los Angeles.

“My ex-partner lived in California for several years, in Laguna Beach, so we used to come here to visit every February and spend about four weeks to escape the harsh German winters,” reveals Rontganger in an interview with THE FIGHT.

“Although we were based in Laguna Beach—we spent lots of time in Los Angeles. I always feel so small and humble when I’m there! I’m always aware that I’m just a little European in this huge, new-world city that you usually only get to see on TV and in films and dream about. When you live in Europe and you think of LA, you think of pop stars, film stars, porn stars and sunshine, so when you actually get the chance to visit, it’s just amazing! Everything in Los Angeles is big and fantastic. And I particularly like how creative people are,” says Rontganger.

“Germans have a very easy attitude towards leather,” states Rontganger. “Most guys in my generation grew up in leather, spent their childhood in it—it’s a very robust material, easy to clean and perfect for rompers and kids! In southern Germany, the people also often wear the traditional costumes, with Lederhosen. You could say that leather clothing is almost a part of German culture; people just walk around in it.”

Rontganger, who holds the titles of Mr. Leather Berlin 2012 and German Mr. Leather 2013 and 2014, has also been nominated for an X Award in the category “Best Man in Europe.”

“The awards aren’t until mid-February in Antwerp, Belgium. The competition’s very tough though and I’m up against some really big names in the European fetish community, so I’m not so sure about my chances,” he says.

When asked about racism within the community Rontganger says that—in some ways—he has experienced what he calls “positive racism.”

“Germany is still quite a mono-cultural society, as there aren’t really many people of color here. I’m often the only black guy, literally wherever I go, so I stand out, especially in the leather scene,” reveals Rontganger.

“Because I’m different, people notice me and they want to talk to me or have sex with me, which is why I call it ‘positive.’  Many people here believe black men smell different and have horse cocks, and they want to find out if it’s true. The funny thing is that I’d say the Germans are more horse-cocked than anyone else—they just don’t know it because everyone else is the same as them! My skin color makes me exciting and interesting, even exotic and sexy, but if you look at it objectively, it’s still however a form of racism.”

“When I became German Mr. Leather, however, there were a few people who were not at all impressed! They didn’t like it that I wasn’t born in Germany, nor that a black guy is representing them… The Germans are very direct and say exactly what they think—smiling in Germany is considered to be a sign of weakness, so people tell the truth through gritted teeth—so it wasn’t easy at the beginning. But I’ve spent more than half my life here and in the meantime I feel more German than anything else, so I’m able to relate to them and they can also relate to me.”

All in all—says Rontganger, “they see that I do my best to represent Germany on an international level, so I’ve managed to alter their opinions of me. In the meantime, I get a lot of positive feedback. I’m the only non-white titleholder in Europe, representing a very white German society, and now they’re actually quite proud of themselves for having chosen me. It sends a positive message about Germans internationally, who up until only very recently had to cope with being collectively deemed Nazis and racists by everyone. Strangers often come up to me and tell me how proud they are of me! It touches me every time…”

As one of the judges in the upcoming Mr. LA Leather contest in March, Rontganger says that “the most important thing for any Mister is that he must be approachable. People in the community often have questions or problems; some are lonely and need now and again someone to talk to or some personal support in difficult situations, or advice on where to go or how to get leather. It can be tough, but I think they’ve got to be able to feel that they can contact to you, that you’ll make a little time for them, where appropriate. You also have to be a role model, not only wearing your leathers at the big events, but on the street, in the supermarket, when you’re running everyday errands. I think we must set an example: that none of us should be ashamed of who and what we are… Gay men and women have been adjusting to the heterosexual way of life for thousands of years, now it’s time for us to stop adjusting and to start simply fitting in, the way we are. That’s what I’ll be looking for in the candidates: courage, patience and authenticity.”