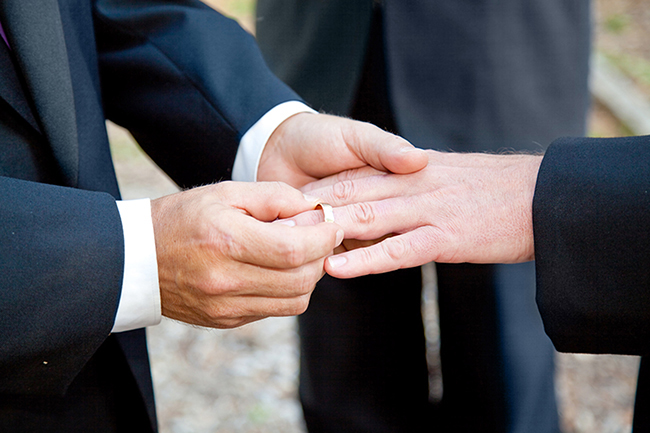 I couldn’t be more happy and proud to realize that America is finally ready for gay marriage.
I’m just not sure if I am.

Recently, an innocent scroll through my Facebook news feed turned into an odyssey of terror the likes of which I’d never experienced. I saw something that mortified me. My throat tightened. My muscles clenched. My eyes widened in shock and horror. It was there, via the computer screen, that I experienced the kind of pain and horror that straights had been experiencing since the dawn of humanity: the horror that ensues when you find out that a friend of yours is getting married.

Not a straight girl, mind you. Six years after college graduation I’ve become quite accustomed to the photos of various female acquaintances from college shopping for wedding gowns or proudly displaying photos of their engagement rings. This one was different. This one was a gay guy.

This man was a fraternity brother that I’d known since school (when I was out and he was deeply closeted). This was a man who I’d gotten sloppy drunk with at a dive bar in the south that was modeled after a high school locker room when our livers were both youthful enough to withstand jello shots until 2AM before an early morning the next day.

This man was now grinning at me via a photo through Facebook with his HUSBAND’S arms draped around his neck in a display of complete and absolute love, adoration, and affection. He did so, mind you, while being a grand total of five years younger than me and surrounded by what seemed like 10,000 of his closest friends. Of course I was terrified.

I was terrified because my friend’s marriage and happiness was a visual reminder that every step I make in dating has to be made with the possibility that it is Going Somewhere.

Where, I’m not sure, but the destination I saw in my friend’s photo is one that I’m not sure I’m ready to arrive at just yet. I was terrified because their smiles were a visual reminder that the price of our right to Marriage Equality is going to be paid in a million little ways by all of us.

Not at the polls, mind you, because gay marriage is pretty much an inevitability at this point. However, gays, trust me when I say that we will PAY. We will pay when we see our gay friends getting married and achieving a level of happiness that we wonder if we’ll ever see.

We will pay when we become the target of those pitying looks from our straight friends who wonder why we “just haven’t met the right person” instead of giving them to that one straight girl who’s perpetually single and always down to go to the gay bar.

We will pay whenever a gay magazine like the one you’re reading decides to put a picture-perfect couple on the cover for their “Wedding Issue.”

Not that this is a bad thing, mind you. There are plenty of awesome, amazing things that are happening for our community that have the unintended effect of filling me with crushing anxiety. Gay marriage is just the most recent one.

The thing is, we are just like everyone else.

We deserve love and affection and devotion and to be able to share our love with family and friends watching in an expensive location while drunk on the booze and food we’ve gone into debt to pay for just like everyone else in America. We deserve courtship and to enter relationships with the goal of marriage and to be happy just like everyone else. It’s just that the speed from which we’ve gone from the glorification of promiscuity to the idealization of gay marriage is giving me a bit of whiplash.

Of course, I’m happy for my friend. He’s a very sweet guy and he and his boyfri… HUSBAND seem head over heels in love. I couldn’t be more happy and proud to realize that America is finally ready for gay marriage. I’m just not sure if I am. Maybe I should stay away from Facebook, or planet Earth, for a while.