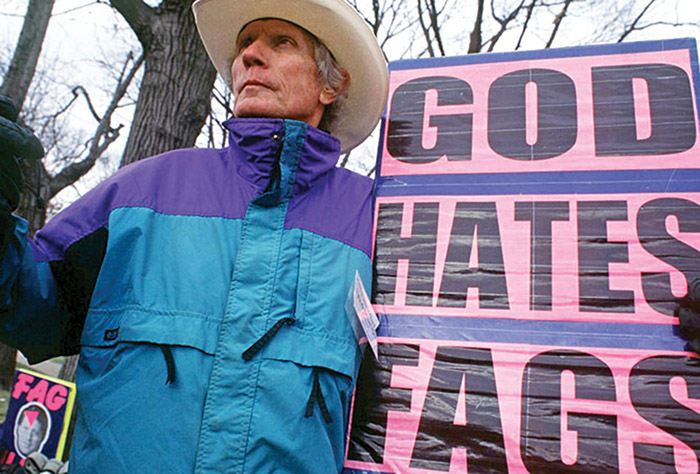 Guys like Jerry Falwell and Pat Robertson were also claiming that “God Hates Fags.” They were just using nicer language. Fred Phelps was a grotesque caricature of what they saw when they looked in the mirror. And after a time, the rest of America could hardly miss the similarity.

THE GOWNED CRUSADERS, HOBBY LOBBY AND OUR COMMUNAL LEGAL STATUS

> I’ve been twiddling my typing fingers this week, delaying this column in the hopes of being able to cover the federal marriage ruling out of Michigan and/or the Supreme Court’s decision on whether or not to review the New Mexico photographer case. Sadly, I’m out of time and neither headline has popped into view. [Ed Note: breaking news—we did win that Michigan case, yay!]

Does it really matter? News is bustin’ out all over these days, and the Michigan ruling, when it comes, will simply fall in line behind Utah, Ohio, Oklahoma, Virginia, Tennessee, Texas, Kentucky and all the other federal court opinions of recent months. As for the High Court, I’m guessing they might duck the New Mexico case anyway, but that doesn’t make up for the frustration of not knowing their decision right this instant.

Speaking of the High Court, on March 25, the gowned crusaders were scheduled to hear arguments on the Hobby Lobby case, a question of whether the Christian owners of the Hobby Lobby corporation could refuse to offer insurance coverage for contraception based on their right to religious freedom. Mitt Romney was actually right. Corporations are people under constitutional law. But their rights are not as expansive as those of an actual individual.

So how expansive are they? The answer this summer will have an obvious connection to our communal legal status.

> Now here’s an actual piece of hard news that has been wrongly overlooked in the mainstream press. Do you recall the Ninth Circuit opinion that basically rewrote the law books in favor of gay plaintiffs throughout the far west? I am referring to the gay juror case that led the federal appellate court to rule that denial of equal protection to gay men and lesbians was presumptively unconstitutional.

Well, the deadline to appeal that decision, either to the full Ninth Circuit or the Supreme Court, has expired. There was no appeal! Yay! In the nine states governed by the Ninth Circuit, it is now settled and binding law that discrimination against gays must be reviewed under heightened scrutiny; a standard that puts the burden of proof on the accused to come up with an important or compelling reason to justify the inequity, and to show that the unjust policy is closely related to that reason. Hint: it’s impossible for an antigay law to survive heightened scrutiny.

Three of the nine states already enjoy marriage equality; Hawaii, California, and Washington. But for the other six, the die has been cast as well.  Oregon, Nevada, Idaho, Montana, Arizona and Alaska can no longer defend their marriage bans in court with any likelihood of success.

Of course, Oregon doesn’t want to. The attorney general is practically begging a federal judge to legalize marriage this summer and make it effective at once. And Nevada, which had been fighting a marriage case in the Ninth Circuit for some time, took one look at the gay juror opinion, threw up its hands and gave up. Both the governor and the attorney general announced the state would no longer defend the marriage ban in the Slots State, and although arguments have been postponed due to scheduling conflicts, the Ninth Circuit will soon pull the plug on marriage discrimination in Nevada.

When they do, guess who is forced to come along for the ride? Idaho, Arizona, Montana and Alaska, that’s who. And maybe Guam! I guess the High Court will put a stay on such a decision, as they might for a marriage victory in the Tenth or Fourth Circuits. But as I said, the die is cast even if the winnings have yet to be raked over to our side.

MAY HE REST IN AGONIZING SELF RECRIMINATION

> I assume you read that Fred Phelps kicked the bucket the other day. I don’t know about you, but I found it enjoyable to watch the leaders of the far right squirm as they tried to make a distinction between his brand of homophobia and their own kinder gentler variety. The problem was that guys like Jerry Falwell and Pat Robertson were also claiming that “God Hates Fags.” They were just using nicer language. Phelps was a grotesque caricature of what they saw when they looked in the mirror. And after a time, the rest of America could hardly miss the similarity.

He was surely helpful in his way. I always wondered where he got the money to run around the country doing his protests. I could not believe that the religious right would fund him, considering the PR damage he was inflicting on their side. So I sometimes wondered if one of our gay groups wasn’t secretly sending him cash. Not really, but it would make an interesting plotline don’t you think?

I read that there will be no funeral, but I bet the Phelps gang is planning a little private ceremony in the back of some Topeka cemetery. Not that I would want a big demonstration, but there’s a part of me that would like a handful of gay men and lesbians to stand within a hundred yards singing “It’s Raining Men” to a loud soundtrack as the Westboro Church tries to bury the pater familias. What could they say? They went to the High Court to defend their right to impose emotional distress on a funeral party in the name of Free Speech. (And rightly so, I would add. I supported the Phelps’ side in that case.)

> Finally, it looks as if our adversaries’ latest tactic has failed in the state legislatures. After Arizona governor Jan Brewer vetoed the law that would have allowed business owners to refuse gay clients based on religious freedom, the bandwagon pulled to stop and everyone but Mississippi hopped off.

Our foes are flailing around for new talking points in a nation where roughly 59 percent now support marriage equality and almost no one supports overt discrimination against gay men and women.  So they’ve been hoping that Americans will rally round the devout Christian butchers and bakers and candlestick makers who simply want to go about their business without being forced by state law to accommodate Godless homosexual customers. I mean, Hey! What’s so wrong with that? They’ve basically won the right to marry. Can’t they just leave us alone?

“If a gay couple is turned away at the door,” wrote columnist Rich Lowry the other day, “the market has a ready solution: There are other bakers, photographers and florists. The wedding business is not exactly bristling with hostility to gay people. If one baker won’t make a cake for gay weddings, the baker across town can hang a shingle welcoming all couples for all types of weddings. This is how a pluralistic society would handle such disputes. Instead, in the cases mentioned above, the gay couples reported the businesses to the authorities for punishment.”

Actually, the marketplace in our pluralistic society will self-select for bias all by itself without any help from state legislatures. It’s likely that most gay couples will seek out friendly businesses for their wedding services, through advertising or referrals or just through instinct. I suppose there can never be a statute against giving grudging or rude service to a customer you don’t like. So Christians will always have that option, and I assume most gay clients would respond by turning to a welcoming shingle as Lowry suggests. But they’ll do it by choice rather than force of law.

But let’s be clear, we’re not just talking about bakers and dress shops. Last year, two Oregon lesbians were kicked out of their cab at night on the side of the interstate by a driver who disapproved of them on religious grounds. A state agency has just determined that the driver violated state law in the process, and a civil rights case will go forward against him. So, Mr. Lowry? It’s one thing to move on to the bakery down the street with the rainbow sticker in the window. It’s quite another to find a taxi at one in the morning on IH-84.

By the way, the women had been out carousing at a “vegan strip club.” Only in Portland.