The Problem With Party Drugs | The Fight Magazine 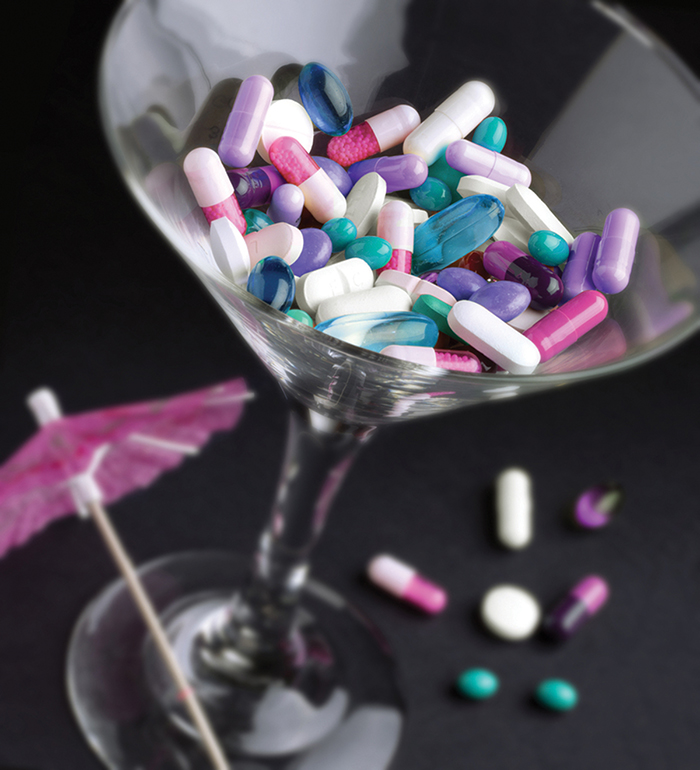 Just because Miley Cyrus and Kanye West are seemingly okay after partying with Molly and other drugs, (depending on your personal definition of what “okay” is), it doesn’t mean that you will be.

WITH THE WAKE OF DAYLIGHT SAVINGS and warmer temperatures every year comes not just spring, but a deluge of fun as windows are left open and winter layers are stripped off. Traveling spikes as colder months melt into a long party season that, for many, begins with spring break and various music festivals across the globe and extends through summer and fall.

Unfortunately, the dangerous substances that fuel all this mirth and revelry are a serious problem. Despite the intense popularization of party drugs as experience-enhancers, the truth of the matter is, they can just as likely ruin an experience—or a life—by sparking addiction and overdoses or exacerbating mental health issues.

You could find a variety of drugs at a rave or party, ranging from classics like cocaine, ketamine, and MDMA (in different forms), to LSD, mushrooms, marijuana, and even emerging “legal” synthetic drugs such as Spice/K2 and bath salts.

Whether it’s legal or illegal, misuse of any substance is a threat to both physical and mental health. This is especially true under party circumstances, as general dehydration and alcohol are common aspects of the experience, making the brain and body even more vulnerable to a drug’s negative side-effects.

There is also the illusion of drug purity. Consider the version of MDMA known as “Molly,” the powdered alternative to famously cartoonish ecstasy pills. In the past few years, Molly has spotlighted as the rave, club, and party-goer’s drug of choice thanks to the misconception that Molly is the purer, safer, and more potent form of euphoria-inducing MDMA.

Actually, Molly, in its pill and capsuled forms, is a man-made MDMA product that is often cut with other drugs and chemicals without the user’s knowledge. Cocaine, meth, PCP, caffeine, and cough-syrup are common additional ingredients that help chemists and dealers expand their MDMA supply and profits.

Augmenting drugs with other chemicals is a practice that applies to other substances as well, as drug “cookers” constantly change their recipes to evade law enforcement and make their drugs more addictive. This is true for most drugs, even for so-called “natural” marijuana, which is often grown in or laced with mystery ingredients-like heroin-in order to hook users. Basically, there’s no way to know what you’re putting in your body. Furthermore, just because Miley Cyrus and Kanye West are seemingly okay after partying with Molly and other drugs, (depending on your personal definition of what “okay” is), it doesn’t mean that you will be.

Another issue is what is known as drug cocktailing, or using multiple drugs at once. As referenced above, mixing drugs can be unintentional because products are spiked and altered unbeknownst to users all the time. Cocktailing, however, typically refers to intentional use of multiple substances. Starting with a few drinks, taking multiple hits of Molly, a bump of cocaine to stay up, then mellowing out with a J or Xanax so you can fall asleep at the end of a night isn’t just reminiscent of a montage from “The Wolf of Wall Street;” it is actually a familiar sequence in the party scene.

Any single drug on its own can be dangerous, but misuse may lead to symptoms such as vomiting and asphyxiation, extreme dehydration, hyperthermia, heart complications, or seizure. Needless to say, drug cocktailing taxes the heart and brain in extreme ways, upping the risk of hospitalization, overdose, and death.

Moreover, use of these drugs, even in the lively and exciting setting of a club or festival, can trigger or worsen feelings of anxiety and depression. This is especially true the morning after a fun night or weekend, as common party drugs like MDMA and cocaine provide their high by flooding the brain with its supply of neurotransmitter serotonin, which is then depleted after use.

Sadly, experiences of discrimination, neglect, misunderstanding, and abuse are common in the LGBTQ community. When left unaddressed, certain individuals use drugs and partying as crutches to soothe or “replace” these negative memories and emotions. Some people may party with drugs recreationally and appear to avoid falling down the rabbit hole, but in most cases, the “benefits” of a high do not outweigh potential legal, physical, economic, and emotional consequences.

The allure of a massive concert or a hot pool party is understandable, but the near omnipresence of drugs can make it difficult to prioritize health over socialization, especially if you frequently use or abuse substances. There are LGBTQ-friendly treatment programs across the country that can help. For struggling individuals, addressing the emotions that drive addiction and learning healthy coping mechanisms, with the guidance of qualified therapists or treatment professionals, is the best hope for recovery.

Joel Edwards is the Executive Director of Morningside Recovery, an addiction and mental health treatment center in Orange County, CA, that specializes in dual-diagnosis and individualized care. For more information about Morningside Recovery and their LGBTQ-friendly programming, call (866) 384-5444 or visit www.MorningsideRecovery.com.