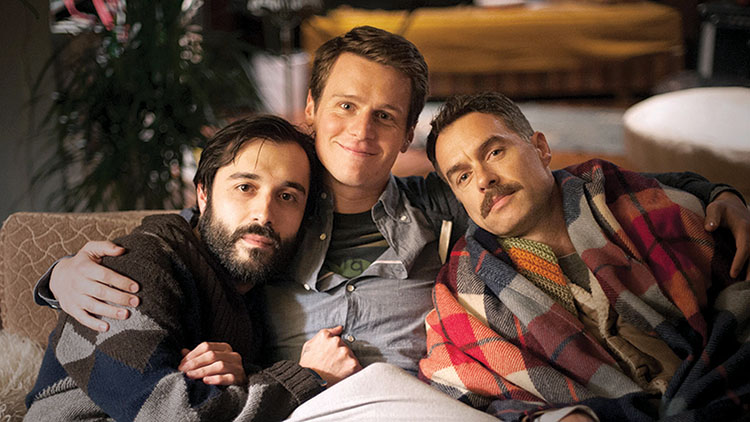 If I still lived in San Francisco, I’d probably watch the new HBO show, “Looking,” just out of hometown pride and satisfaction.

You’ve heard about our marriage victories in Utah and Oklahoma by now. In fact, these days, it seems as if every state is embroiled in a marriage equality contest and who the hell knows where or when the next Big Gay Headline will break into the national news. Pennsylvania has no less than seven active lawsuits. The National Center for Lesbian Rights has just filed in Florida. There are two in Texas. There are cases in Virginia, Tennessee, North Carolina, Oregon, Idaho, Michigan-you get the picture.

Indeed, rather than track cases by state, it may be more useful at this point to track them by federal appellate district. Our most important battles are arguably now being waged (like the Utah and Oklahoma cases) in federal court, so while it would be nice to see marriage equality spread through another state supreme court ruling (like our wins in New Jersey and New Mexico) the critical decisions will be coming from the federal bench—and they will all be appealed to the federal appellate courts.

At present, we have a case pending in the Ninth Circuit; the lawsuit against the state of Nevada that has been trudging along in a tedious fashion for a couple of years. Then, we have the Utah case which has been fast tracked at the Tenth Circuit. Since Oklahoma is also under the jurisdiction of the Tenth Circuit, those cases may be combined. Will that slow down the litigation? We’ll see.

In Ohio, we have a marriage recognition case now proceeding to the Sixth Circuit. That case involved a somewhat narrow question of whether or not the state was obliged to list a same-sex spouse on a death certificate. But obviously, the issue on appeal will be whether or not the Buckeye State can ignore the general marital rights of those who wed outside Ohio borders.

There are 12 federal appellate courts, one rung down from the Supreme Court, and each of those courts makes binding law for all states in their jurisdiction. That’s why Judge Reinhardt’s recent gay rights ruling was so important. It will become law for seven western states, plus Alaska and Hawaii. ***[See Ann Rostow’s article on this topic – “Good Judge” – on page 24 in this issue.]***

Marriage is already legal throughout the First and Second Circuits, with the exception of Puerto Rico, and the District of Columbia circuit is also a free marriage area. So that leaves six other appellate circuits where marriage litigation might appear.

You can certainly single out the “good” circuits and the “bad” ones. But in truth, it’s something of a crapshoot. Three-judge panels are selected by lot, so in theory, we could end up with two or three conservative judges even in a court dominated by Democratic appointees and vice versa. That said, a panel decision can be reviewed by the entire bench of any circuit court, so for example, were we somehow to win a marriage case in the Fifth Circuit, the full bench would bitch slap us back into our corner in a heartbeat.

Check out the wikipedia entries for the various courts to count the number of Democratic or Republican appointees. And keep in mind that Reagan and Bush One picks are not necessarily all that bad.

Is it wrong to pass judgment on a TV show that you’ve never watched or a book you’ve never read? Of course not! That’s why I have no problem deciding not to watch the new HBO show, “Looking.” From what I’ve read, the show is a bore, and trades solely on the hackneyed notion that gay men are just like everyone else, looking for love in all the wrong places and trying to live an average American life. Yawn.

That said, if I still lived in San Francisco, I’d probably watch it just out of hometown pride and satisfaction. I stopped watching The Mentalist for a long time because I got sick of Red John. Now, the show is based in Austin, where I live, and I’m back if only to see my own skyline and city streets.

One pet peeve about The Mentalist: When they were based in Sacramento, they were always flitting down to LA or up to the Napa Valley, only to be back in their office a few hours later. Hello? It’s a six hour drive to LA, and they weren’t seen in an airport. Now I watch them hop over from Austin to Corpus Christie (four hours), get someone, interrogate them at headquarters (another four hours), and continue their beachfront investigation the next day. Ditto Houston, about two and a half hours by car. C’mon writers. A little realism.

Wait. I  just stumbled onto yet another review of “Looking,” in which a gay guy slams Esquire because a straight guy wrote that “Looking” was dull.

Interesting! My impression of “Looking” was based on a New York Times piece by Alessandra Stanley and another report on Slate by J. Bryan Lowder, who is gay. Both of them trashed the show for lack of interesting content, and although Stanley isn’t gay, I trust her judgment implicitly. So without reading Esquire, I’m inclined to agree with the straight guy and charge the gay guy with reverse homophobia, the tendency to assume that a gay show or idea or comment must be worthy and that criticism of said show or idea or comment must show bias.

Okay, so I have decided to watch the show and read the Esquire review so we can pursue this topic in future columns. Oh, and I went to early grade school with Alessandra Stanley, whose father gave me a dollar when I lost my tooth during an overnight visit. That was huge back then. I’ve never forgotten it.