The Ralph Lauren Of Leather | The Fight Magazine 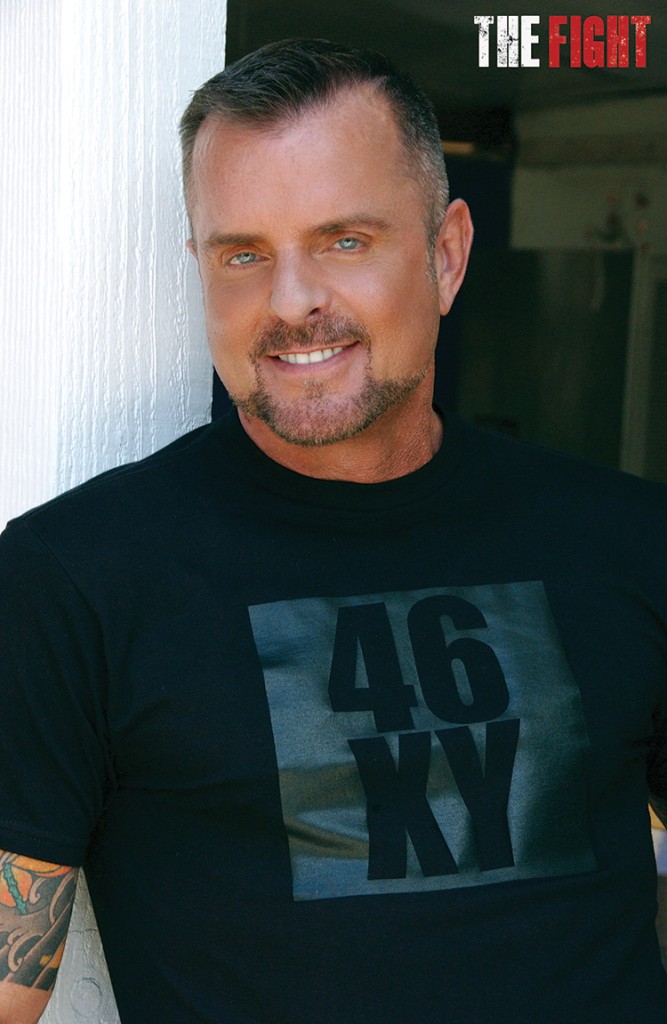 David McGrath, president and founder of “Twisted DNA 46 XY” on being sober, the leather fetish scene and living every day to the fullest, with integrity.

IF YOU HAD THE CHOICE to start the business of your dream, what would that business be?  David McGrath, the president and founder of “Twisted DNA 46 XY,” got his answer while shopping for a friend at the 665 Leather and Fetish retail store in WeHo.

He saw the need for luxurious gifts and home accessories geared towards leather and fetish.  He wanted to be able buy a gift for a friend that didn’t require to be stuck into or strapped onto a person.  That is how “Twisted DNA 46 XY” was conceived in 2011. The company offers high quality of full grain Italian leather goods that use edgy leather man elements such as armbands, harnesses and bandannas to accessorize throw pillows, duvet and apparel, mixing Tom of Finland elements with the Ralph Lauren Home Collection.

McGrath knows his leather and fetish.  He was first introduced to the leather scene at age 17 in the early 80s at a time when he says New York City was grungy and fun.  “I went to discos like Studio 54, the Ice Palace, the Mud Club, Paradise Garage and I’d always end up at the Anvil,” he says. “At 17 I was introduced to the Mineshaft, which was the pinnacle of the whole leather fetish scene.”

“Sex was new to me,” he says of those early New York days.  “I was fascinated by the freedom the leather community had in expressing their sexuality, which was very refreshing as opposed to the stand and pose bars, where you had no idea what guys were about.  In the leather community, it’s kind of put right out in front of you.  There was this honesty that I found refreshing.”

Unfortunately, like a lot of young gay men during that time, his HIV positive diagnosis would end the party.  “I was diagnosed HIV positive on February 2, 1987 at 10 o’clock in the morning.  They said, ‘We expect six months to a year, so get your affairs in order.’”

On July 1, 1987, McGrath started working a program of recovery during a time when a lot of gay men were dying of AIDS.  “It was scary back then” he said. “When I first got sober, some people didn’t have the luxury of a year. Some people got to 20 days, and died.”

He would stay sober for ten years. Unfortunately, a decision to leave New York and move to Palm Springs would lead to a relapse that would keep him out for a good five years. But a move to Denver to care for his partner’s mother would get him sober again, this time for good.

It was during his Denver days that he was diagnosed with AIDS in 2005. “I got very sick,” he said.  “My body rejected all the medications.  I went in the hospital with 24 t-cells, and 105-fever.  I had pneumocystis, so I was confined to the house for almost a year.”

Los Angeles was chosen as his new home after the passing of his mother-in-law.  A healthy McGrath wasted no time getting involved and supporting the leather community that helped shape who he is today.

“The fetish community has evolved in tremendous ways,” He said.  It’s become broader, much more socially acceptable with books like ‘50 Shades of Grey,’ where Midwest housewives are reading about being tied up or blindfolded.  It’s almost become mainstream.”

McGrath’s journey would all lead to “Twisted DNA 46 XY.”

“I wouldn’t be able to run this business if I wasn’t sober,” he said.  “If I would have started this company drinking, I would have gotten bored with it, gotten frustrated and thrown it away.  Looking at things through sober eyes, I’m much more proactive.”

Today, with new treatments and medications, McGrath is the healthiest he’s ever been, which is not bad for a kid who was told he’d never live to see 30. He lives with his partner of 15 years who he married 10 years ago.  “I’ve come a long way.  I’ve had a great life. I try to live every day to the fullest and with integrity and although I have many character flaws, I do the best I can and that’s all I can ask of myself.  Life is too short.”

David McGrath will celebrate 9 years of clean and sober time on May 1, 2014.

To get a full scope of everything that “Twisted DNA 46XY” has to offer, visit twisteddna46xy.com.