A Prince Of Two Cities | The Fight Magazine 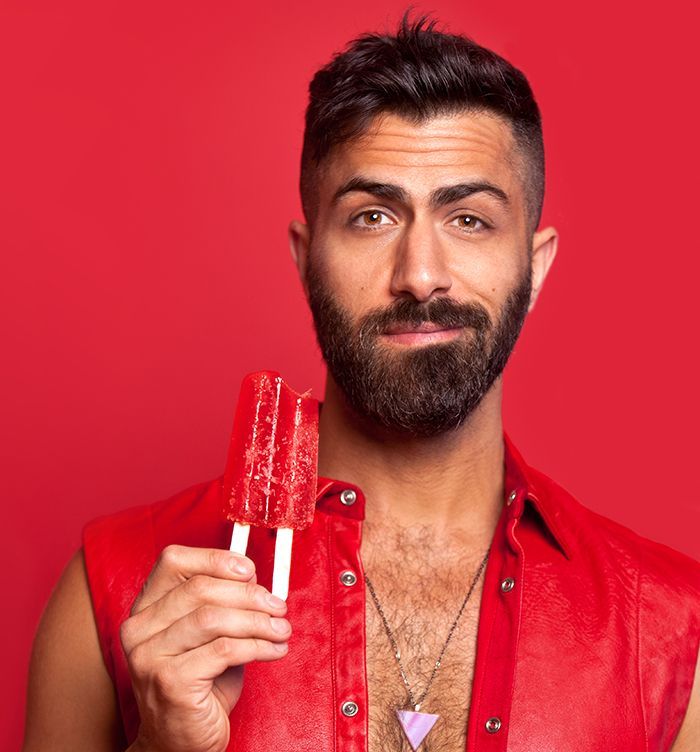 Even if you don’t know who he is, you’ve seen his face; smoldering wolf-yellow eyes piercing your soul from party fliers and go-go boxes up and down the West Coast. Or maybe you’ve encountered his thoughtful meditations on queer community and relationships on the internet or in the pages of some magazine. It’s even possible you’ve heard his music while listening to the radio, or flipping through YouTube channels. Aram Giragos (aka Adam Ramzi) is an actor, musician, adult film performer, therapist, and writer—part of a loose-knit class of LGBTQ artists, activists, thinkers, and leaders emerging to shape the conversation about what it means to be Queer in the post-equality/post-PrEP era.

Aram was born in Los Angeles, and knew from an early age that he wasn’t “like the other boys.” At the small Armenian American private school Aram attended from kindergarten through his senior year, there was a very specific model of how a man should carry themselves through the world, and he never quite fit into it. While the other boys listed to Metallica or Tupac, Aram was devouring Bjork and Radiohead.

“It wasn’t until after I became an adult that I realized that even though I always had this desire for the other kids to like me, especially the popular ones, I also quite enjoyed and even preferred being different from them.”

After college Aram pursed music, playing base for the the band IO Echo at the height of his career before leaving the band. He wanted to help people. So he went back to school to study Queer Theory and LGBT Development. And while in school Aram was approached by an adult film studio, and “Adam Ramzi” was born.

“Sex is a huge part of how we develop psychologically, and for me personally, is a huge part of my identity, and our identity as a community. Not having other queer kids around me as a young boy must have instilled that in me or something. I could not fathom speaking to someone else about finding a man attractive. That does something to a kid, way more than we could realize.”

For Aram, Adam Ramzi was a way to turn that process on its ear, and gain an awareness of his physical body while processing all the implications that come with having sex with another person, as well as being okay with sharing his naked body with the world.

“Call it attention seeking, call it being a slut, whatever, it’s both those things, and owning that and making the best of it has been absolutely liberating. So when it comes up in the room with a counseling client, I try my best to provide an environment where that shame that we’ve had all these years, and all these negative associations we have with some of our deepest desires… it all just disappears, and now we are just humans having a conversation about sex. And the more we know how to talk about it in a way that is healthy and open, the more we get to know our deepest selves.”

Aram says that he will sometimes catch himself thinking about his alter ego, and wondering if it will impact his future career in negative ways, and he gets mad at himself.

“I worry that maybe a certain counseling position at a school or something won’t hire me, or maybe a certain acting gig would be impossible to land, and sometimes I will even be careful how I word my experiences on a social media post, and I will actually question myself… Like wait, you can’t preach about openness and not be totally OPEN. So I’m working on that, and being open with even that struggle is part of my particular process.”

After earning his Masters in Psychology, Aram received an invitation to apply for an internship in San Francisco—a city he had been visiting for years, and had always loved—at the SF Therapy Collective. He leaped at the opportunity. A few short months later he packed up and moved up to the City by the Bay. He was very happy here, but after three years he started to feel LA calling him home.

“I will admit, there was something that always felt somewhat temporary about living in SF. I have an apartment in LA that I was never willing to let go of, so I sublet it out, and I’m very connected to my family here. I moved up to SF, did some good work, made some amazing friends, and learned so much about how to create and foster community.  I felt the call to come back and use what I’d learned down here, and continue to bridge the gap between the two cities.”

As the Tech Boom in San Francisco both creates greater opportunity, drawing in many Angelenos looking to make their fortune, and displaces SF artists who move to LA looking for cheaper rents while staying within California lifestyle, the LGBTQ communities feel ever more connected and inspired by each other, and the gap between the two has begun to feel smaller, though it still exists.

“When I first moved to SF, the disdain [expressed by San Franciscans against LA] was much worse, and I couldn’t help but be curious about it. I would actually ask people who had negative reviews of LA to clarify their positions, and the responses I got were sort of shallow and not really based in anything. ‘I just hate how fake LA is,’ or some nonsense. I see them each for what they are, and what they are is not for everyone!”

Now that he’s had the opportunity to live in both cities, Aram has come to consider both of them his home, but the rich creative environment he sees permeating LA’s LGBTQ community keeps him excited about life in the Southland.

“This is a city of creators, and I feel like I’m bearing witness to all this creative energy being tossed around, and it’s being reflected even in just the parties we go to. Pool parties aren’t just populated by haircuts in speedos anymore, and even the circuit party scene is being turned on its ear by transfolk, artists, people of color, muscle boys who can turn a look and not be afraid of being judged.  I take a step back and look around at these shared spaces, and then I’m like holy shit, these are my FRIENDS who are contributing to this mindset. It feels like we are changing the world, and it’s so exciting.”

But he still hears San Francisco’s siren call in the back of his mind, still yearns for the “cozy village” life of the Castro-Mission-SOMA Triangle, the ability to walk and bike everywhere, and SF’s dream-like beauty. “There’s a lot I don’t miss too, but the good outweighed the bad, and that’s why I am visiting literally like every two months.”

The thing Aram misses most of all about San Francisco is the feeling of being part of a “tribe.” The “importance of tribe” was a value he absorbed in San Francisco, and when he moved back to LA things felt very isolated for a while.

“It took a minute, but I feel like I’ve gotten a better handle on how to create the kind of community I need around me to thrive, and figuring out a variety of ways to facilitate it. The power of a simple game night is shocking! Just to spend a few hours with some of your favorite people, laughing your asses off. It’s so important to me! SF taught me that it’s worth the effort. LA is teaching me how to make the effort.”

Recently Aram began writing, DJing, and doing quote/unquote “legitimate theatre” under the name “Aram Giragos.” It was a name that had been rattling around his mind for years, but he decided to adopt it for his own after a conversation with his father.

“He’s a pretty prolific lawyer in the Armenian community, and he legit said to me, all stern and serious, ‘You know, Aram…sometimes people google me, and they find you…and I just, uh, wanted you to know that.’ I blinked a couple times, and was like ‘Uh, well okay then!’ So I figured maybe privacy in some manners was warranted.”

And while he has embraced to use of different names for use in different fields and situations, he is clear that this is not a Batman/Bruce Wayne situation.

“It’s all the same. People are cute sometimes, when they’re like ‘I get it, Adam Ramzi is a persona!’ No. There are no personas. It’s all me. I cringe when I say things like this, but here it goes: I am my own brand. My brand is me. The names are just the labels that signify the different facets.”